The possible causes of hair loss in women

Causes of Hair Loss in Women - Hair loss in women can be caused by many factors such as genetic predisposition, stress, diet deficiencies, hormonal imbalance and others.

Much like the growth of grass, plants and other vegetation is dependent on what goes underneath the soil, the growth on your head is dependent on what goes on inside the scalp. Given normal conditions for hair loss and fall cycle, women would enjoy normal hair. The problem occurs when something messes with the normal cycle of hair. This could be genetic, hormonal disturbances, diet deficiencies, reaction of skin conditions to medications, immune system problems and stress. 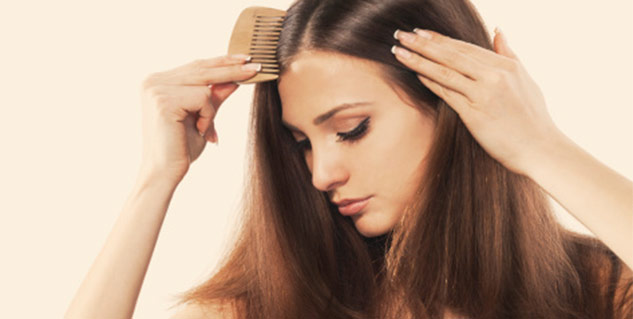 Much like the growth of grass, plants and other vegetation is dependent on what goes underneath the soil, the growth on your head is dependent on what goes on inside the scalp. Given normal conditions for hair loss and fall cycle, women would enjoy normal hair. The problem occurs when something messes with the normal cycle of hair. This could be genetic, hormonal disturbances, diet deficiencies, reaction of skin conditions to medications, immune system problems and stress.

Some hormonal changes lead to hair loss in women. These changes can occur during pregnancy, birth control, problems of thyroid and menopause. In case of some temporary hormonal changes such as pregnancy, start of hormonal contraception or thyroid problems, the hair grows back as soon the hormonal processes return to normalcy. As women produce less of oestrogen during menopause, and more of hormones such as testosterone, hair loss can naturally result.

Women can lose hair when they lose weight rapidly due to deficiency in diet. This is one of the reasons why crash diets are inadvisable. The diets low in protein and iron make the hair thin. If lack of proper nutrient intake is the cause of hair loss, it can be reverted by improving the diet and replenishing those nutrients.  Sometimes there is a very little iron, vitamin B or other vitamins in the body.

Stress is linked to hair loss and hair growth. Emotional and physical stress can both be a cause of hair loss. There is a particular condition called trichotillomania. These individuals try to pull their hair out from time to time and leave a bald patch on their head. Some of them do not even realise what they are up to while others consciously hide this tendency from other people. Such people need to undergo treatments such as therapy and medications.

Conditions affecting the immune system can cause hair loss. Alopecia areata is a condition that affects the body’s immune system in which the hair follicles are attacked. Other conditions which can lead to hair loss or hair thinning are diabetes and lupus.

For a woman to lose her hair would mean the end of the world. The end of the long locks, beautiful curls, and the silky smooth shadow song deserves better treatment.

Your hair grows from what we call the hair follicle and this happens at an average rate of about ½ inch per month. Each of your hair grows for two to six years and then rests and then eventually falls out. Then again a new hair would soon begin to grow on its place. Baldness in women happens when the hair begins to fall off and the new ones that are supposed to grow in its place do not show up. Here we take a look at all the reasons for baldness in women other than the above mentioned causes that we sometimes overlook.

Both estrogen (female) and testosterone (male) hormones are found in the body systems of men and women but the levels of both the hormones differ from men to women. The level of estrogen is more than testosterone in women and vice versa in men. Estrogens are essential hormones which are responsible for the sexual development of the female reproductive organs. Women have the advantage of preventing pattern baldness due to the natural and higher presence of female hormone estrogen which balances and prevents effects of testosterone, therefore preventing genetic hair loss till some extent. However, due to hormonal fluctuations which happen due to various reasons, the level of estrogen in a woman can drop giving a chance for testosterone to take over and convert into DHT and cause hair loss.

Other than genetics, hair loss in women can also be caused due to imbalance of thyroid hormones, pregnancy, menopause, diseases and drug treatments. The onset of hair loss in women is mostly seen during the perimenopause or menopause period during which the estrogen levels fluctuate until they reach a stable lower level thereby reducing the protective effects of estrogen against testosterone.