Can Depression Cause Diabetes?

Diabetes and depression have a bidirectional link. Depression can lead to development of diabetes, and conversely diabetes and its treatment can also result in depression. 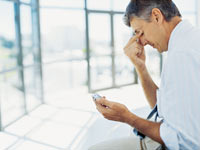 Recent studies to find out the link between depression and diabetes have shown that depressed people are more likely to be  diagnosed with diabetes.

Why depressed people are at risk of diabetes?

People suffering from depression tend to overeat and usually lead a sedentary lifestyle. They do not feel like going out or indulging in physical activities and end up with various lifestyle diseases such as diabetes and obesity. These people are usually negligent towards their health and complications which might occur with the onset of diabetes. It is usually seen that depressed people have drug addiction which further boost their chances of having diabetes. However, some authors have suggested that depression and diabetes share a two-way relationship. In ‘Archives’ of Internal Medicine, the Harvard School of Public Health wrote that depression may lead to diabetes and vice-versa.

Study to know the Bidirectional Link between Depression and Diabetes

In this study, the research team gathered data on 65,381 females aged 50 to 75 to analyse if any relationship exists between diabetes and depression. The women were asked to fill a questionnaire on their health practices and medical history. This questionnaire was filled after every two years till a decade. The women were categorised into two groups- first, who were suffering from depression at the time of study and the second group didn’t have depression.

During the ten years of the whole study period, 2,844 females reported to have developed type 2 diabetes and 7,415 were identified with depression. The findings of the study stated that people who had depression were at 17 per cent increased risk of diabetes than those who were non-diabetics.   Women taking antidepressants were at 25 per cent risk of diabetes.

The study also showed that women who were found to be diabetics had 29 per cent greater risk of depression than non-diabetics. Diabetics taking insulin had 53 per cent higher chances of depression.

The author of the study said that depression in diabetics could be due to the biochemical changes directly caused by diabetes or its treatment, or the strains of the lifestyle which diabetics are compelled to follow.

The good part in depression-diabetes link is that depression can be successfully treated in diabetics. It is important to consult a doctor if a diabetic has been found to show symptoms of depression. There are several antidepressant medications, but their suitability for diabetics should be confirmed after consulting with a doctor. Another effective treatment for depression in type 2 diabetics is "talk therapy" or cognitive behavioural therapy.