Being Married can Make you Depressed: Study

According to a recent study conducted by psychologists in the US marriage can trigger depression. 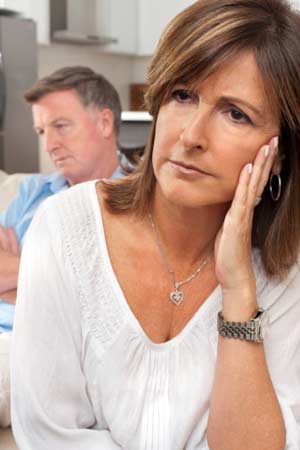 A recent study conducted by psychologists in the US suggested that marriage can trigger depression.

Constant nagging, criticism, or being belittled by your partner can make you feel discontented with the relationship, says the study.
The most significant characteristic of being depressed is that people who feel stressed within the relationship for a long time are more unlikely to cherish the positivity which marriage has brought to their lives.

However, meditation can be an effective remedy when it comes to fighting the negative effects, concludes the report.

The study included couples who were married and their frequency of frowning was measured. Questionnaires were given to the couples and were asked to rate their stress on a 6-point scale. The questionnaire and the assessments were repeated 9 years later and in the 11th year the same group was made to take part in `emotional response testing’ to study how quickly they can overcome negative experiences. During the test, the volunteers were shown 90 images which were a mix of negative, neutral and positive photographs.

The study published in the Journal of Psychophysiology reported that people who had a troubled marriage were very less responsive to positive images.

Professor of psychology and psychiatry at the University of Wisconsin-Madison said the finding of the study showed how some people became more vulnerable. ``This is not an obvious consequence of marital stress, but it’s one I think is extraordinarily important. This is the signature of an emotional style that reveals vulnerability to depression’’, he added.

Although earlier studies showed that married people are happier and healthier than single people but, marriage can also be the most significant of all culprits which may cause long-lasting social stress.

Chronic marital stress was examined by the researchers in order to see how common daily may lead to depression and other similar conditions. The volunteers in the study were tested at the beginning of the research and again after 9 and 11 years.