What is Paediatric Tuberculosis?

Paediatric Tuberculosis is the infectious form of tuberculosis that occurs in children. Know more about what it is and how you can prevent its occurence, here.

Updated at: Mar 22, 2012
Communicable DiseasesWritten by: Bhadra KamalasananPublished at: Mar 19, 2012 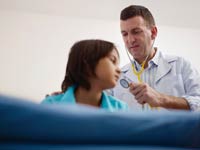 Tuberculosis or TB is an infectious disease that is hard to diagnose, especially in children. Besides, if a child has HIV, the process of diagnosis becomes even more difficult as an HIV infected child may be misdiagnosed as having TB and vice versa.

The TB control strategy that exists in different parts of the world currently focuses on pulmonary TB that is active and is the primary source of tuberculosis in children. The vaccination of infants with BCG is no longer considered as the best preventive measure against an active TB in adults. The vaccine, however, can help the prevention of disseminated forms of the disease such as tuberculosis meningitis.

There is no particular vaccine that exists and works to prevent the disease entirely. The BCG vaccine was invented in 1921 and is helpful in treating preventing certain types of TB such as meningeal and military tuberculosis. It, however, is not effective in preventing the occurrence or development of pulmonary TB during adulthood.

Why Children have a High Risk of Active TB Disease

Children are at a higher risk of developing the infectious disease because their immune system is less developed compared with that of an adult. In children, the chance of developing the disease is even more after an infection. One of the primary tuberculosis risk factors is the existence of the TB infection in a close family member. Therefore, the family members of children with an active TB should be checked for TB to find its source and be treated accordingly.

Having a good TB control programme that will ensure the early diagnosis and treatment of the disease is important. A TB child with HIV will most likely end up with devastating effects on the health such as deafness, mental retardation and paralysis.

The primary TB prevention method that is used in children is vaccination. It is, in fact, the most widely used vaccine even though it is relatively ineffective in preventing the infection from spreading. Despite of the existence of TB vaccine, a quarter of the million TB infected people are children, who catch the infection by coming in close contact with an infected person. The only way one can address this problem is by diagnosing and treating all those that are infected with the bacteria.