What are the types of Holes in the Heart?

There are two types of holes in the heart: Atrial Septal Defect and Ventricular Septal Defect. Read the article to know more about the defects.

An atrial septal defect (ASD) is a hole in the part of the septum that separates the atria (the upper chambers of the heart). This hole allows oxygen-rich blood from the left atrium to flow into the right atrium instead of flowing into the left ventricle as it should.

This means that oxygen-rich blood gets pumped back to the lungs, where it has just been, instead of going to the body. 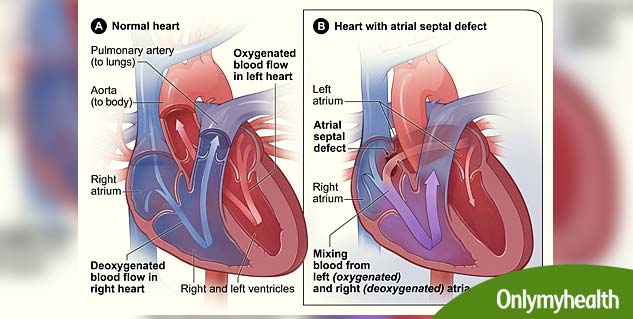 Figure A shows the normal structure and blood flow in the interior of the heart. Figure B shows a heart with an atrial septal defect. The hole allows oxygen-rich blood from the left atrium to mix with oxygen-poor blood from the right atrium.

An ASD can be small or large. Small ASDs allow only a little blood to flow from one atrium to the other. Small ASDs don't affect the way the heart works and don't need any special treatment. Many small ASDs close on their own as the heart grows during childhood.

Medium to large ASDs allow more blood to leak from one atrium to the other, and they're less likely to close on their own. Most children who have ASDs have no symptoms, even if they have large ASDs.

The three major types of ASDs are:

Over time, if an ASD isn't repaired, the extra blood flow to the right side of the heart and lungs may cause heart problems. Usually, most of these problems don't show up until adulthood, often around age 30 or later. Complications are rare in infants and children.

These problems develop over many years and don't occur in children. They also are rare in adults because most ASDs either close on their own or are repaired in early childhood.

A ventricular septal defect (VSD) is a hole in the part of the septum that separates the ventricles (the lower chambers of the heart).

The hole allows oxygen-rich blood to flow from the left ventricle into the right ventricle instead of flowing into the aorta and out to the body as it should. 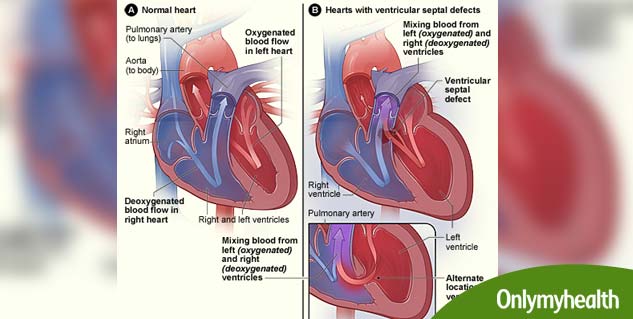 Figure A shows the normal structure and blood flow in the interior of the heart. Figure B shows two common locations for a ventricular septal defect. The defect allows oxygen-rich blood from the left ventricle to mix with oxygen-poor blood in the right ventricle.

An infant who is born with a VSD may have a single hole or more than one hole in the wall that separates the two ventricles. The defect also may occur by itself or with other congenital heart defects.

Doctors classify VSDs based on the:

Medium VSDs are less likely to close on their own. They may require surgery to close and may cause symptoms during infancy and childhood.

Large VSDs allow a large amount of blood to flow from the left ventricle to the right ventricle. They're sometimes called nonrestrictive VSDs. A large VSD is less likely to close completely on its own, but it may get smaller over time. Large VSDs often cause symptoms in infants and children, and surgery usually is needed to close them.

VSDs are found in different parts of the septum.

Over time, if a VSD isn't repaired, it may cause heart problems. A moderate to large VSD can cause:

Know All about Angioplasty