Scientists have found that targeting a specific brain region may help smokers kick the butt, which is responsible for symptoms of nicotine withdrawal.

Researchers are constantly trying hard to find out the easiest and do-able method to help smokers quit. One such study has found that targeting a specific brain region can aid the effort of kicking the butt. 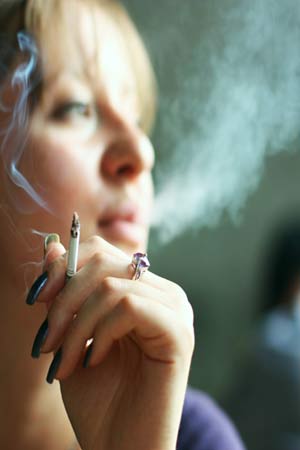 The region of the brain responsible for nicotine withdrawal symptoms has been identified by scientists at the University of Massachusetts Medical School (UMMS). These symptoms are headache and anxiety, which keep smokers from quitting.

It was found that activation of GABAergic neurons trigger physical nicotine withdrawal symptoms in the interpeduncular nucleus. GABAergic are neurons that secrete GABA, the brain’s predominant inhibitory neurotransmitter.

Interpeduncular nucleus is an area deep in the midbrain that has recently been shown to be involved in nicotine intake.

"We were surprised to find that one population of neurons within a single brain region could actually control physical nicotine withdrawal behaviours," said Andrew R Tapper from the Brudnick Neuropsychiatric Research Institute at UMMS.

"Most of the work in the field has been focused on the immediate effects of nicotine, the addictive component in tobacco smoke, on reward circuits in the brain," Tapper said.

"But much less is known regarding what happens when you take nicotine away from someone who has been smoking for a long time that causes all these terrible withdrawal symptoms.

"Our main goal was to understand what brain regions are activated or deactivated to cause nicotine withdrawal symptoms," Tapper added.

A series of experiments were conducted on mouse models and it was found that nicotine withdrawal symptoms can be activated or deactivated independent of nicotine addiction.

"When we activated the GABAergic neurons in the interpeduncular nucleus, mice suffered withdrawal symptoms even if they had no previous nicotine exposure," Tapper noted.

"If you can dampen the activity of this brain region chemically during nicotine withdrawal then you would hopefully be able to help someone quit smoking because you could reduce some of the withdrawal symptoms that they are experiencing," he said.

The study was published in the journal Current Biology.

Ward Off Stress With the Help of Probiotics