Stages of male female pattern baldness are receding hairline, upper crown balding and full balding. Baldness has a definite pattern in men and women, reasons of it being hormones, ageing and genes.

Hair loss is generally considered men’s dividend, although same pattern is experienced by women when they reach middle age. Several surveys have also confirmed that women are equally bothered of hair loss as their opposite gender. 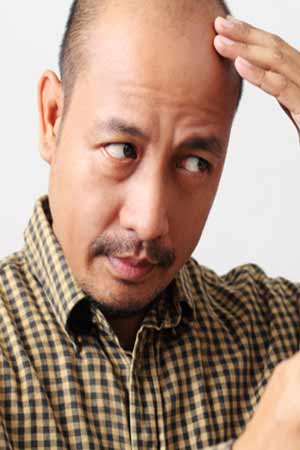 Testosterone, a hormone in high levels in men, is mainly responsible for male female pattern baldness. The primary function of this hormone is the growth and development of male reproductive organs by producing dihydrotestosterone (DHT) by an enzyme called 5-alpha reductase. In context to hair loss, dihydrotestosterone (DHT) affects hair follicles, shrinking them to limit hair growth. In the scenario where DHT gets overproduced, one of the consequence is hair loss. On the other hand, Female pattern baldness is associated with Androgenetic Alopecia, associated with causes such as genetics, aging, poor nutrition, disease and changes in hormone levels.

Receding hairline is described as the initial stage of the baldness pattern by researchers. In this stage, hair gets thin along the sides of the forehead, getting in the form of ‘M’. Witnessed after age of 25 years, baldness recedes back toward the crown. In women, front of the head usually experience little hair loss; receding hairline is not that prominent.

On the other hand, women start losing hair in their 40s. Unlike men, hair loss in women is equally dispersed along entire top of the scalp. In comparison to men, women’s hair get more thin as they age. Although women do not experience full balding at the crown.

In the ultimate stage of pattern baldness, men and women become completely bald. Although, some strands of hair encircle the head around the bottom of the head and close to neck. Due to absence of receding hairline, women do not have the typical bald spots as men. During this stage, hair at the front of head can be maintained along with sides of the head, leaving a bald spot of at the top.

There is no specific age to experience baldness; the phenomenon varies from person to person. Generally, full balding stage is witnessed in men and women that have lived for over 60 years.