Postpartum Depression: When should one seek Medical Advice? 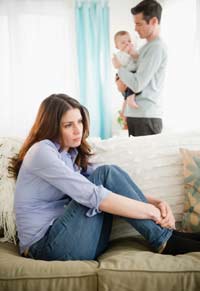 Postpartum depression is a common problem and it can occur in as many as 10% to 20% of women after childbirth, however many cases are not recognised (about 50%). It usually develops within the first few months following childbirth but a woman is probably at risk of developing postnatal depression for upto 1 year after childbirth.

According to the World Health Organization, major depression is a leading cause of morbidity and disability in adults. Signs and symptoms of postpartum depression are similar to other major depressive disorders such as depressed mood, feeling excessively tired, lethargic, loss of interest in sex, loss of interest in enjoying any activities, loss of appetite, psychomotor agitation or retardation, fatigue, feeling useless, worthless or guilt, decreased concentration, and recurrent thoughts of death or suicide.

Postpartum depression at a critical time for baby, mother and family can have several adverse effects such as marital distress, problems with mother-infant bonding and interaction, behavioral and cognitive abnormalities in the child. These children are more likely to have developmental delays in psychological, cognitive, neurological, and motor development.

When to Screen for Postpartum Depression

According to some research a well-child visit at 2 months after delivery can be used to screen for postpartum depression. This can probably help to diagnose majority of women likely to develop the condition within the first 6 postpartum months.

Some studies suggest that screening for depression during the first 3 weeks is not reliable and it may not consistently identify mothers at risk for depression. Hence routine, universal postpartum depression screening before 2 months is not advised.