Pancreatic cancer has four main stages with different symptoms in each one. Check out the causes and treatment of this type of cancer. Read on.

Each and every organ of the body plays a major role in performing different functions. It helps in releasing enzymes that help with digestion and in maintaining blood sugar levels. There can be growths or tumours in the pancreas that night be cancerous or non cancerous. It is tough to diagnose them through basic screening tests. One cannot feel any lumps around the stomach in pancreatic cancer. Pancreatic cancer is very different from other types of cancer like breast cancer, colon cancer, etc. Onlymyhealth editorial team talked to Dr. Tejinder Kataria, Chairperson, Radiation Oncology, Cancer Institute, Medanta - The Medicity, about the stages, causes, symptoms and treatment of Pancreatic cancer. Also read:  You Should Never Ignore These Warning Signs of Pancreatic Cancer

1. The first stage is a small tumour, 2cm in size, confined to the pancreas which is located in the body or the tail.

3. If it has spread to the areas beyond it, then it is stage three. If the cancer is involving the lymph nodes, then also it is considered as stage three.

4. Stage four is if the cancer has spread to the other structures like the liver or lungs or the bone. 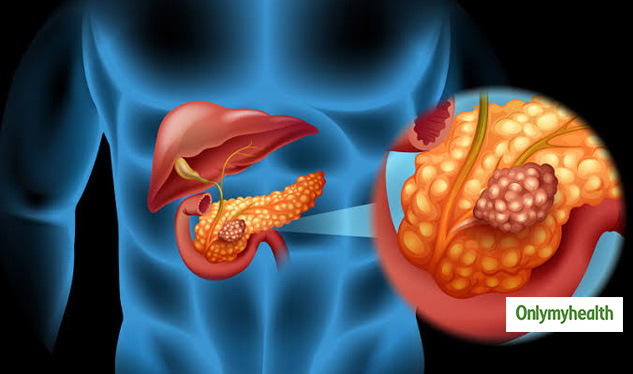 As per Dr. Tejinder, there are no direct known causes as such. There is no known direct association of any factor with pancreatic cancer. However, there are some triggers that might be associated with this type of cancer. They are:

In the case of jaundice as a symptom, there is a need to do some imaging and ultrasound. It may or may not pick up unless the tumour is very big. CT scan of the upper abdomen can also show that there is a tumour in the pancreas. If the patient is going through jaundice and pain in abdomen, then the patient goes under an endoscopy and then an endoscopic ultrasound. Upper gastrointestinal endoscopy ie, upper GIE , in which one can see the tumors clearly. Another clear way to diagnose is an MRI. In order to stage the patient, to see if the cancer has gone out of the pancreas or into the lungs or liver, then doctors also go for a PET scan. A biopsy can also be done for the diagnosis of pancreatic cancer. That is normally done by an endoultrasound. Dr. Kataria said, "There is something known as a Tumour marker which should be on a CA 19.9. Some patients may not a have a biopsy positive tumour but the imaging may show the tumour and CA 19.9 as high, so then we conclude that the patient has pancreatic cancer."

How to treat pancreatic cancer? The most curative treatment for pancreatic cancer is surgery. This surgery is known as a Whipple surgery. If it is not chemo sensitive tumour but it's inoperable, then there are two treatments, one is known as the chemotherapy and the second is called radiotherapy. And in radiotherapy also, there is a specific treatment known as the stereotactic body radio therapy (SBRT). These two treatments chemotherapy and SBRT are the best treatment if surgery is not possible. If surgery is possible, then that is the best treatment. Sometimes, it can be downstaged, like it can be made operable by giving chemotherapy or radiation and chemo together.