Elephantiasis, also known as Lymphatic Filariasis, is a slowly developing disease, and happens due to a mosquito infected by a parasite.

Have you ever come across any person with excessively swelled up legs or hands, almost similar to an elephant’s leg? That person could be a suffer from Lymphatic Filariasis or Elephantiasis. This disease gets its name for the symptoms it shows on the person with Filaria. What makes us talk about this health concern, as it is prevalent in India, the awareness regarding the same is a big question. The Government of India is implementing Elimination of Lymphatic Filariasis (ELF) Programme to eliminate Filaria by the end of 2021. The government conducts Annual Mass Drug Administration campaigns (MDA) to administer preventive LF drugs that has to be given once in a year for 5 to 6 years to everyone as advised by the healthcare staff in the endemic district as the reproductive age of the worm is 5 to 6 years.

As we observe the National Filaria Day on November 11, Onlymyhealth exclusively got in touch with Dr N.S. Dharmshaktu, Senior Public Health Consultant, Winner of the prestigious Award International Gandhi award of GMLF Wardha for 2019 awarded by President of India. He has been extensively working in the movement to eliminate Lymphatic Filariasis from roots. Let’s understand what the expert has to say about the causes, symptoms, and treatment of Filaria:

What Is Filaria (What is Elephantiasis)

Filaria, commonly known as Elephantiasis is a disfiguring and disabling disease. It is caused by a parasite that is spread by infected mosquitoes. The infection is usually acquired early in childhood, and in most of the cases, there are no symptoms. The disease manifestation appears much late, generally at the age of  20 to 25 years with repeated acute episodes of lymphangitis (local inflammation involving the skin, lymph node and lymphatic vessels) manifesting with fever and chill, swelling, itching and pain on the site where lymph vessel is affected. It lasts for 4 to 7 days. Symptoms of filaria starts developing painful huge swollen limbs (lymphoedema) which begins with some swelling and then keeps increasing in volume. Hydrocele (swelling of the testes) in males is also common in endemic areas. 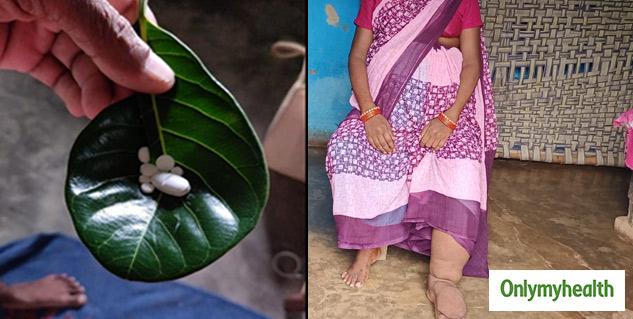 How is Filaria transmitted? (How does Elephantiasis Happen?)

Filaria is transmitted in human beings by a female mosquito bite that deposits a parasite called Wuchecheria Bancrofti at the site of a bite from where it travels to the lymphatic system. The worms reproduce in the lymphatic system and the female worm releases >50000 microfilariae (mf) every day. It takes about 5 to 18 months’ time from the time of entry in the body to releasing of mf. When the worm dies, it causes local inflammation at the site. It is proven that this disease is not hereditary, and is not caused by the curse of God or as a result of past sins.

Some questions that people often ask about Filaria:

How To Cure Or Prevent Filaria?

WHO recommends a two-drug regimen given through a Mass Drug Administration (MDA) campaign to the entire endemic population once every year for 5–6 years. To interrupt transmission in an endemic community, the microfilarial load must be reduced below that necessary to sustain transmission, and for a period long enough to exceed the fertile life span of adult worms. This is estimated to be between 5–6 years, during which mf is absent or less than 1% of the population. This only happens if a large part of the population (over 80%) takes the drugs. The requirement according to WHO criteria for breaking the transmission of disease in the community is that the population coverage of MDA should be 85% and it must be consumed by above 65% of people once in a year for 5 to 6 year if MDA is done with two drugs (DEC and Albendazole).

Also Read: Do You Have Swollen Ankles and Feet? These Could Be The 5 Possible Causes

Haathi Paon is a slowly developing disease and only 1% of the mosquitoes become infective. There is no extra human host, mf does not multiply in the human body. The parasite gets easily detected with modern tests for which public cooperation is utmost. One round of MDA can kill mf and prevent it for one year. So, if you come across any of such cases, please do not hesitate in spreading awareness and reaching out to officials for proper management and care of the filaria patient.