The Cause of Lung Cancer due to Smoking Cigarettes

Smoking is one of the greatest causes of lung cancer, and there is ample amount of evidences to prove this point. Here you will get a fair idea of the connection between smoking and lung cancer.

Oh yes! It did look cool when you first started smoking. All the young girls were massively impressed seeing the heroic look on your baby face. Fast forward a few years, and you cannot even climb stairs without panting like a marathon runner. Not so cool now, is it? 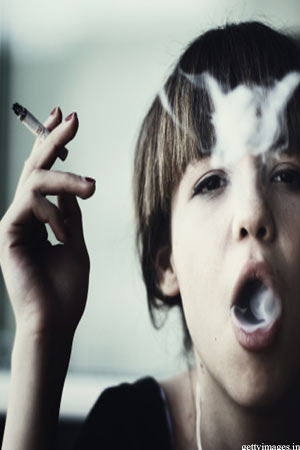 It has been found that the earlier in your life you start smoking, the higher are your risks of developing lung cancer. This risk also depends much on the pack years that you have smoked. Pack year refers to how much one has smokes, so “one pack year” would mean that someone has smoked one packet of cigarette daily for a year. Lung cancer happens in four out of five cases due to smoking, but it is also true that there are people who have been smoking all their lives and have not be diagnosed with lung cancer.

Harmful Ingredients in a Cigarette

Cigarettes are made of dried tobacco leaves and also there exists ingredients that are added for flavour and to make smoking more pleasant. The smoke that is produced in these products is a complex mixture of chemicals that are produced by the burning of the tobacco. This is to the extent that the smoke produced is made up of more than 7000 chemicals, and this includes over 60 that are known to cause cancer. Also, some of these substances are responsible for the cause of heart and lung diseases too. Therefore, it is needless to say that the smoke that you are inhaling in the process of smoking is lethal. Here is a list given below with some of the chemicals that are found in your cigarette smoke.

Your cigarette smoke also contains tar and poisonous gases such as carbon monoxide and nitrogen oxide. Finally, you are primarily smoking even after knowing it will kill you is because you are addicted to nicotine which is an addictive drug. Furthermore, the leaves of tobacco contain radioactive materials and the amount depends on the soil the plants were grown and the fertilizers that were used.

How Cutting Down or Quitting Helps

Quitting smoking lowers the risk of lung cancer but it will definitely take some time before the risk decreases to a great extent. If you as a smoker have smoked for more than a short period of time then your risk will never be able to reach that of a non-smoker, but nevertheless it is worth it. In fact researchers have shown that Asians and Australians have been found to reduce their risk of developing lung cancer by up to 70 percent by quitting smoking.

How Smoking affects your Lungs

The damage to lungs begins early on in smokers and smokers have a lower level of lung function when compared to non smokers of the same age. Lung function can continue to worsen as long as the person smokes and it takes many years for the problem to become noticeable enough so that lung disease can be diagnosed. Also, smoking causes many other diseases as threatening as lung cancer.

Cigarettes were once cool, but it is high time you quit if you do not want to put your life at risk of lung cancer.