Former Minister Of External Affairs and BJP Leader Sushma Swaraj No More, Suffered A Cardiac Arrest At The Age of 67

It came as a shock when senior BJP leader Sushma Swaraj was declared dead on Tuesday, August 6 due to a heart attack. As per sources, she was brought dead to the hospital.

Known to be India’s most Millennial senior leaders, who left no stone unturned in connecting with the youth across the globe through social media platforms, Sushma Swaraj was a global inspiration. She was rushed to AIIMS in New Delhi on Tuesday night and was declared dead due to a cardiac arrest. It came as a shocker to all when the 67-year-old leader was declared dead, confirming tweets by the official page of Congress and the Hon’ble Prime Minister himself. Prime Minister Narendra Modi put out a heartfelt message for the former Minister of External Affairs, which read as

A glorious chapter in Indian politics comes to an end. India grieves the demise of a remarkable leader who devoted her life to public service and bettering lives of the poor. Sushma Swaraj Ji was one of her kind, who was a source of inspiration for crores of people.

In an ironic instance, Sushma Swaraj put out a tweet congratulating the Prime Minister on the day she suffered a heart attack. The tweet said that she was alive to see a day of this great importance.

The whole world came to a standstill when the news broke out, with people paying condolences to the bereaved family, giving strength to her family.

I’m shocked to hear about the demise of Sushma Swaraj Ji, an extraordinary political leader, a gifted orator & an exceptional Parliamentarian, with friendships across party lines.

My condolences to her family in this hour of grief.

May her soul rest in peace.

Saddened, pained & broken on demise of Sushmaji. She was one of the most outstanding politicians in the Present Era. She distinguished in all positions. She held Senior Positions with the Party, NDA Govt. & while in opposition. She leaves behind a void which is difficult to fill.

She Suffered A Heart Attack 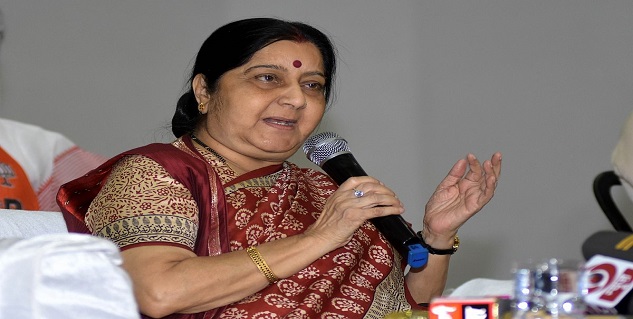 Sushma Swaraj suffered a heart attack and was taken to AIIMS immediately for emergency care. However, as luck would have it, she was declared dead due to a cardiac arrest by the doctors at AIIMS. In 2016, Sushma Swaraj even had a kidney transplant owing to her health conditions.

Sushma Swaraj was a leader par excellence. She was known to be one of the most accessible leaders in the external affairs ministry and had the image of helping several people of the diaspora in distress. She was instrumental in assisting several people across the globe, finding it difficult to get back to their loved ones due to document issues, etc. She did her best in getting in touch with officials of various countries to help out those reaching out to her for help. Instances, where Swaraj came forward with her whole heart, was Operation Rahat, tweets seeking immediate assistance on twitter by people, etc.

@SushmaSwaraj good morning ma'am. My dadisa is 85. I want to get her passport done so that she can go abroad first time in her life. #PleaseHelp she has adhar card and voter ID card as only documents. @PMOIndia pic.twitter.com/6ixW3L43eY

To requests like these, Sushma Swaraj did her best to help out those in distress.

Dadi Sa should apply for a Passport. She should get the Passport with these two documents. @prateek61296

It is rightly said that a glorious chapter in Indian politics inevitably comes to an end with the death of Sushma Swaraj. This year was different as on account of her health. She chose to take rest to recover soon and not contest in the elections. She is survived by her daughter and husband and will be known forever for her exceptional work done for the welfare and benefit of the people.