The next time you are hit in the knuckles for being restless, tell your parents how you increase your lifespan by being fidgety. Here is a study that proves how being figetive can add more years to one's life. 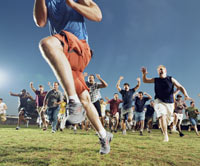 According to a recent study, people, who are restless and keep fidgeting, are likely to live longer than people, who sit idle in a place for long periods. The researchers of the study said that spending a lot of time on sedentary activities, such as watching television or working at a computer, can shorten one’s life span and raise the risk of developing conditions, such as stroke and heart problems. To counteract the consequences of being a couch potato, one may break up the sitting time by engaging in activities, such as stretching or walking.

Dr Wilby Williamson, NHS expert, Sports Medicine, said that people watch television for over four hours and spend about 60-70 % of their time in spending a sedentary lifestyle. Williamson said that one could easily reduce the risk of developing metabolic diseases, such as diabetes and cardiovascular diseases by indulging in less strenuous activities, such as dancing or taking a stroll around the house during an advertisement between television shows.