Health issues such as obesity, diabetes and heart diseases have always been linked to an unhealthy lifestyle but sitting for long periods and having lunch at your work station also increases the risk of potentially fatal blood clot. 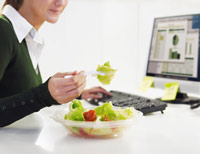 In a survey conducted by ComRes, it has been found that eating lunch at your desk can shoot up your chances of developing a fatal blood clot. The survey was conducted on 1,000 young professionals aged under 30 and video gamers aged 16 to 21. Out of 1000, almost 73 per cent of the office workers admitted that they eat their lunch at their desk.

Three out of four professionals also admitted that their busy schedule does not allow them to have a lunch break. Almost 95 per cent of the gamers reported that on an average, they play for almost two hours without a break. Experts have warned that after 90 minutes of immobility blood flow to the vein behind the knee falls by 50 per cent.

Another survey managed by Dr Richard Beasley, director of the Medical Research Institute of New Zealand revealed that people having lunch at their work desks have 2.2 times increased risk of blood clots than those who get out of the office to have lunch. This survey was conducted on 400 workers.

Dr. Richard Beasley said that leading a sedantary lifestyle puts people at a greater risk of lifestyle issues such as obesity, diabetes and cardiovascular diseases. He added further that it is astonishing that only very few working professionals are aware of the immediate threats of prolonged immobility in the workplace.

Dr, Richard said that educating the people about the various health effects related to long periods of immobility in the office and the strategies to change their work practices are of prime importance.

It is estimated that in the U.K, there are more than 60,000 cases of potentially fatal blood clots caused by deep vein thrombosis, which usually forms in leg or pelvis. Thrombosis does not cause any symptom and can reach the lungs through blood vessels.