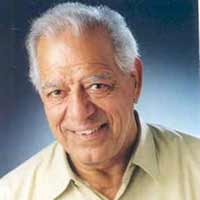 Wrestler-cum-actor Dara Singh has suffered from cardiac arrest and his condition is critical. He was brought in an emergency to the Kokilaben Ambani Hospital in Andheri, Mumbai. Since then, his condition is yet to become stable as he is still on a ventilator and also undergoing dialysis as his kidneys are not functioning.

Dara Singh has been kept on a high dose of medication for keeping his blood pressure under check. The Chief Operating Officer at Kokilaben hospital, Dr Ram Narain was hopeful of his condition improving within 24 hours. According to Dara Singh’s son Vindu, the critical condition could be due to a blood clot in the brain or a cardiac arrest, but he could not be sure.

The actor is best known for his roles in the movies “King Kong” “Faulad”, and Ramanand Sagar’s television series “Ramayana” in which he played the part of Hanuman. He was last seen in the blockbuster movie “Jab We Met” cast as lead heroine Kareena Kapoor’s grandfather. Residents of his native village Dharmoochak near Amritsar are keeping a keen eye on his health. They are also praying for their favourite son’s early recovery.