Bipolar disorder is a mental illness which needs to be treated as soon as possible. If you have sudden shift in mood then you may have this disease.

Our life is full of ups and downs. Since so many things keep on going within ourselves and in our daily life, it affects our routine and brings on several changes in our physical and mental state. These high and lows can sometimes be very challenging both emotionally and physically. Thus it leads to many kinds of disorders. What affects us physically is normally treated but the affect which remains brain is sometimes neglected which later on turns to be a severe health issue. Bipolar disorder is also similar kind of disorder which with time develops into a mental disease.

What is Bipolar Disorder?

Dr. Tanu Singh, Psychologist in Healthcare Clinic, Lucknow says that it is a mental illness which can be determined by extreme changes in mood of a person. It is also called mania. People suffering from bipolar disorder have sudden shift in mood from excitement towards depression or vice versa. They have problem going through their daily tasks and are not able to concentrate on one thing for long period of time. Bipolar disorder is a brain disorder and people who are diagnosed with the disease are often in their young age around 25 years. The shift in mood may extend to around two weeks and then again manic episode starts for another few weeks. 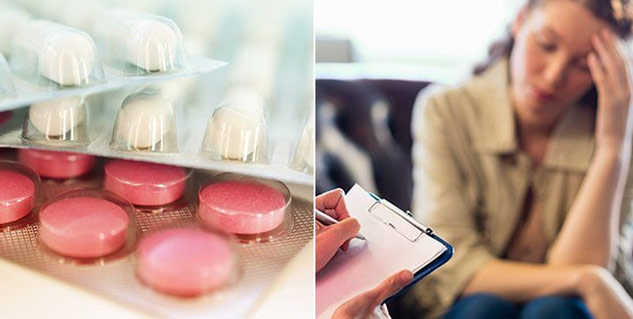 There are many presumptions which are made about this disorder and are often related to dual personality which is absolutely wrong. There is no shift in personality or nature but the internal response system is affected which results is bipolar disorder. Patients who generally come for treatment of this disorder have faced some kind of trauma or situations which affected them badly.

What Are The Symptoms of Bipolar Disorder?

This is the stage of hyper elevated mood. Mania is more intense than hypomania. The symptoms include-

Some people suffering from this disease may spend a lot on drugs, consume alcohol, and participate in inappropriate activities and find it exciting. They may not even realise that what they are doing is wrong or harmful.

Also Read-Caffeine Can Have Adverse Effect On Teenagers. Know Signs When To Stop

Another stage following up with maniac can be depression. In this stage the person may feel giving up his life or try to commit suicide. Some signs of depression in this period are- 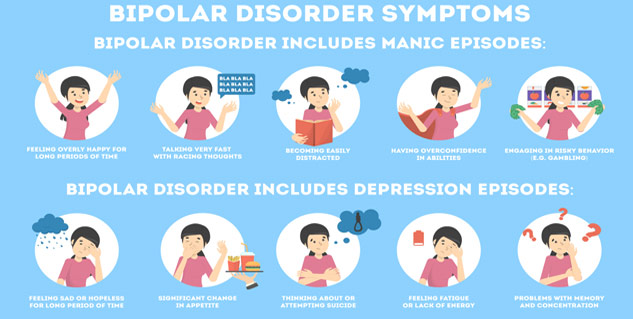 If the considerably previous two episodes are contrasting to a severe extent then there are chances that person may experience psychosis. This is a situation or period when they are not able to differentiate between fantasy and reality. Psychosis is a stage where patient of bipolar disorder suffers from hallucinations which involve delusions that are false but are so strong that the person considers it to be true.

The person going through this stage may experience the following-

Genetics- If there is someone in your parents who has bipolar disease then it is possible that it is carried forward to you. However in most cases bipolar disorder is not hereditary. But the condition is possible making it a relevant cause.

Brain- The structure of your brain may impact the risk of bipolar disorder. If there are any abnormalities in the structure of brain function then it increases the chances of this disorder and can also make it severe.

Environmental Factors- Extreme stress, traumatic experience and physical illness can be some major causes of bipolar disorder. Trauma is the most common cause due to which it happens in people. It influences the brain so much that there are sudden shifts in mood which people don’t realise early but it potential developer of disease.

There are several treatments which are available to manage bipolar disorder but most of them are for controlling or preventing it rather than curing the disorder totally. Treatment of Bipolar disease includes medications, counselling and changes in lifestyle. 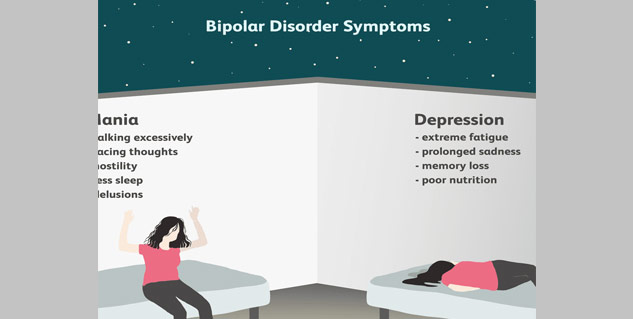 Bipolar disorder is a mental illness which can turn into severe disease if not taken precautions and controlled at right time. This disorder is usually due to some traumatic experience in person’s life. It can be genetically transferred to but chances are minimal. There are many treatment options which are available to control bipolar disorder however most of them are not capable of curing it totally. Hence if you find any such symptoms which regulate you towards bipolar disorder, visit a health expert as soon as possible.

Treatment of Hypertension With Neuro Linguistics Programming And Other NLP Benefits