Breastfed Babies at a Lower Risk of Obesity

Mother's milk can help one be fit throughout life. 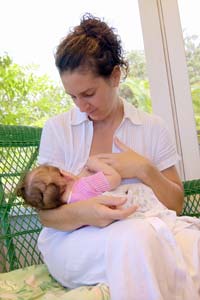 The Faculty of Life Sciences at the University of Copenhagen accommodated a PhD project, which revealed that breastfed babies have a different growth pattern compared with non-breastfed children. Breastfeeding lowers the level/s of growth hormones IGF-I and insulin in the blood, which means that breastfed kids have a slower rate of growth. Therefore, the more a child is breastfed, the more are its chances of having a slightly lower risk of becoming overweight later. The study also found a correlation between the weight of the baby at 18 months and how long it was breastfed.

According to Professor Kim Fleischer Michaelsen, head of SKOT project, the study offers valuable information and knowledge about the various factors that affect the early onset of obesity. Children who are breastfed grow even slower than those who are given formula.  Breastfeeding enables an optimal growth of a baby because it reduces the risk of it developing any lifestyle disease in the future.

The study identified several interesting correlations in the growth of babies up to 18 months that may improve the understanding of the mechanisms that lead to an early onset of obesity. It was observed that the longer the babies were breastfed, the lower their weight was at 18 months.
An interesting fact that the study revealed was that the longer the babies slept, the smaller their waist circumference turned out to be at 18 months and later. Furthermore, the mothers who gained weight during pregnancy had children with a thicker layer of subcutaneous.

Kim Fleischer Michaelsen stressed that there is a need to follow up on the changes that occur in the children later in life to construct the long-term effects of breastfeeding. He also said that other correlations will also be considered a part of the future studies.