Full term pregnancy is divided into three equal parts called three trimesters of pregnancy.In the first month, the sperm fertilises the egg in the fallopian tube. This fertilised egg is called zygote,  which contains genetic information of a child. The zygote develops into an embryo by dividing itself in two cells, which later develop into four, eight, sixteen and so on. Forty-six chromosomes combine with an embryo to give physical characteristics to a child. 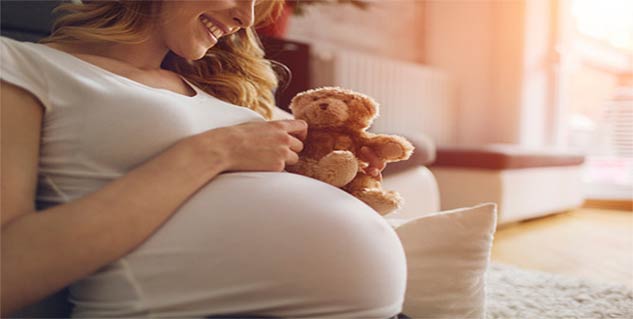 In the beginning of the third month, foetus is about three inches long and all the organs, muscles and nerves begin to function. By this time, the wrists and ankles would have formed and fingers and toes are clearly visible. Genitals of the baby start forming, but it is difficult to know the baby’s sex in the first trimester of pregnancy. Eyelids cover the eyes and fingers and toes have soft nails; kidneys begin to secrete urine.

In the fourth month, baby’s cheekbones can be seen and its hair starts appearing. It is the time when you feel baby’s kicking and his movements in the womb. Foetus develops taste buds and the baby may be able to savour the mother’s meal.

Foetus’s muscles start toning up in the fifth month and the lungs inhale and exhale amniotic fluid. Foetus is six inches long and can reveal his or her genitals. Sensory development start taking place in the brain.By end of the second trimester of pregnancy, foetus is eleven inches long and can hear your sound. The foetus’s skin is covered with fine, downy hair and a protective creamy coating called ‘vernix’.

During third trimester of pregnancy

In the seventh month of pregnancy, the baby starts sleeping and awaking at his regular intervals. His eyes begin to open and close. To accommodate the brain, his head starts growing bigger. Baby can differentiate between sounds and voices. Baby weighs about three pounds in this month.

Foetus is about 19 inches long and weighs about 5 pounds. In the eighth month, baby sleeps most of the time and moves frequently. All his organs are maturing continuously and his hair are also growing. The coating from baby’s skin starts shedding.

In the last month of pregnancy, baby is around 20 inches long and takes a ‘head-down’ position to exit from the birth canal. Baby slips down in the maternal pelvis and placenta detaches from the uterus when the baby is delivered.

These three trimesters are crucial for a prospective mother as well as for the baby. Understanding the growth of the baby in your womb forms a fascinating relationship between you and your baby even before he or she is born.