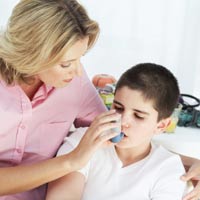 Children who are advised to inhale steroid drugs to cure asthma possess a risk of ending up shorter as adults than those, who do not use inhaled steroid medications, claims a new study.

More than 1, 000 children aged between 5-12 years, who have had mild to moderate asthma, were analysed in the study. The kids were divided into three groups. The first group received an inhaled corticosteroid medication called budesonide twice in a day, the second group inhaled a steroid drug called nedocromil and the third group was placed on placebo.[Read: Types of Asthma Inhalers for Kids]

The researchers found that the asthmatic kids using steroids were half an inch shorter than the asthmatic kids of the same age group, who didn’t use steroids. The average height of the group placed on budesonide was 1.2 cm shorter than the group receiving placebo.  This study is the first of its kind to study children with asthma in their adulthood.

The New England Journal of Medicine report said that the growth-stunting effect of asthma steroids can be suppressed with dose adjustments made by the doctors.