WHO Highlights Facts about Vector-borne Diseases

Vector-borne diseases like dengue and malaria still have a significant impact on the socioeconomic status of countries in south Asia, the WHO said.

Vector-borne diseases like dengue and malaria still have a significant impact on the socioeconomic status of countries in south Asia, the WHO said Thursday, calling for a united effort against them.

Rains in Delhi come with the threat of rise in the number of malaria and dengue cases.

“Twice each year, several persons in the city get affected by these vector-borne diseases — malaria, dengue and Japanese Encephalitis, among others. The diseases cause serious illness and even casualties,” said Delhi Medical Association member Anil Bansal.

According to a news release by WHO (World Health Organisation), more than half the world’s population is at risk from diseases such as malaria, dengue, leishmaniasis, Lyme disease, schistosomiasis, and yellow fever, carried by mosquitoes, flies, ticks, water snails and other vectors. Every year, more than one billion people are infected and more than one million die from vector-borne diseases. 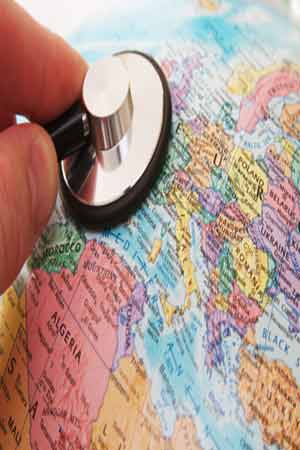 WHO will highlight the serious and increasing threat of vector-borne diseases, with the slogan “Small bite, big threat” on this World Health Day- April 7.

The Organization also emphasizes that these diseases are entirely preventable. Newly published "A global brief on vector-borne diseases" outlines steps that governments, community groups and families can all take to protect people from infection.

WHO representative to India Nata Menabde said: “Vector-borne diseases are transmitted by mosquitoes, sand flies and fleas. There is a need to strengthen the overall healthcare system in the country to prevent these diseases and more financial commitment to contain them. In this regard, we cannot over emphasise the importance of primary healthcare. People have to be empowered with awareness to ensure that these diseases are prevented.”

“A global health agenda that gives higher priority to vector control could save many lives and avert much suffering. Simple, cost-effective interventions like insecticide-treated bed nets and indoor spraying have already saved millions of lives,” says Dr Margaret Chan, WHO Director-General. “No one in the 21st century should die from the bite of a mosquito, a sandfly, a blackfly or a tick.”

The news release said that vector-borne diseases affect the poorest populations, particularly where there is a lack of access to adequate housing, safe drinking water and sanitation. Malnourished people and those with weakened immunity are especially susceptible.

Schistosomiasis, transmitted by water snails, is the most widespread of all vector-borne diseases, affecting almost 240 million people worldwide. Children living and playing near infested water are particularly vulnerable to this disease which causes anaemia and a reduced ability to learn. Schistosomiasis can be controlled through regular mass treatment of at-risk groups with a safe, effective medicine, as well as improving access to safe drinking water and sanitation.

Within the past two decades, many important vector-borne diseases have also re-emerged or spread to new parts of the world. Environmental changes, a massive increase in international travel and trade, changes in agricultural practices and rapid unplanned urbanization are causing an increase in the number and spread of many vectors worldwide and making new groups of people, notably tourists and business travellers, vulnerable.

Mosquito-borne dengue, for example, is now found in 100 countries, putting more than 2.5 billion people - over 40% of the world's population - at risk. Dengue has recently been reported in China, Portugal and the state of Florida, in the United States of America.
Reports from Greece say that malaria has returned there for the first time in 40 years. This highlights the continual threat of reintroduction and the need for continued vigilance to ensure that any malaria resurgence can be rapidly contained.

On World Health Day 2014, WHO is calling for a renewed focus on vector control and better provision of safe water, sanitation and hygiene – key strategies outlined in WHO’s 2011 Roadmap for the control, elimination and eradication of neglected tropical diseases, which sets targets for the period 2012–2020.

Forty percent of the global population at risk of malaria lives in the WHO southeast Asia region, home to a quarter of the world’s population, the release said. ‘These are deadly but preventable diseases. The solution lies in a united and sustained effort from all of us,’ said WHO regional director Poonam Khetrapal Singh.

‘This region recently defeated polio, it is time for us to show the same resolve to defeat malaria, dengue and other vector-borne diseases,’ she added. Vector-borne diseases account for 17 percent of the estimated global burden of all infectious diseases with malaria being endemic in 10 of the 11 countries of the region, including India.