Yoga is a formulated scientific technique that benefits the mind, soul and inner spirit.  To bring perfect balance in his life, one can practice yoga physically or mentally. Originated in ancient India, yoga is practiced worldwide by whole of

Originated in ancient India, yoga is a scientific system of physical and mental practices that helps each individual in achieving their highest potential to improve their quality of life. In Sanskrit, yoga means the union with the divine and the realization of reality. Yoga enables an individual to shed all the impurities of his body, mind and senses imposed on him by this materialistic world.  Yoga helps an individual in building his concentration on the Divine and making him realize his oneness with the Supreme. Yoga has universal application, serving the whole of humanity from all times. In our day-to-day life, yoga can help us to achieve complete physical and psychological growth. You can practice yoga for glowing skin, shinning hair, to cure diabetes and to treat many other health ailments.

Yoga is commonly perceived as movements of the body parts in various idiosyncratic physical postures but people have failed to realize its significance in religious framework. Transcending all religions, yoga develops consciousness of an individual towards the purpose of his life, his spiritual self and relationship with God.  Enhancing the subtle powers of inner self, yoga consists of three main divisions. 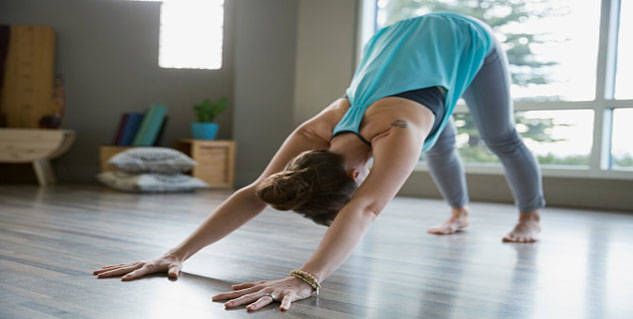 Based on the teaching of Bhagvad Gita (a sacred Hindu scripture), Karma Yoga works towards achieving perfection in actions. Karma Yoga teaches selfless service of humanity. One must participate in the cosmic activity without any expectation of fruits. According to the philosophy of Karma Yoga, individuals are an instrument of Lord Krishna and it is he who works through them. Karma Yoga purifies Antahkarana (the heart and the mind) for the attainment of divine knowledge. One can practice Karma Yoga by his heart and mind through serving a person in need such as a poor sick man.

It is considered as the shortest way to experience and realise one’s relationship with Divine. Bhakti Yoga is based on the philosophy that 'Love is God and God is love'. Bhakti Yoga believes on the thought that knowledge and wisdom can only introduce you with the cosmic principles but to experience the power of supreme in all worldly activities, one has to take the path of pure spiritual devotion. One can practice Bhakti Yoga by concentrating his body, mind and senses on the Supreme.

Based on Hindu philosophy of nondualism, it is also known as Gyana Yoga. In Sanskrit, gyana means knowledge and Jnana Yoga means ‘yoga of knowledge’. Jnana Yoga introduces one with his or her real self and also shows the path to self-enlightenment.

Jnana Yoga believes that there are four means to salvation-

Yoga aims at attaining physical, mental and spiritual discipline in one’s life. Yoga is practiced for various reasons such as improving one’s health, achieving moksha (peace after death) and discovering one’s relationship with universe and the Divine.