What is Peptic Ulcer

A peptic ulcer is a hole or erosion in the mucosal wall of gastrointestinal tract. Bacterium called Helicobacter pylori is the main cause of this type of ulcer.

A peptic ulcer is a hole or erosion in the mucosal wall of gastrointestinal (G.I.) tract. Normally, a mucous layer protects the lining of the stomach and small intestines against the acids which are produced in the stomach. 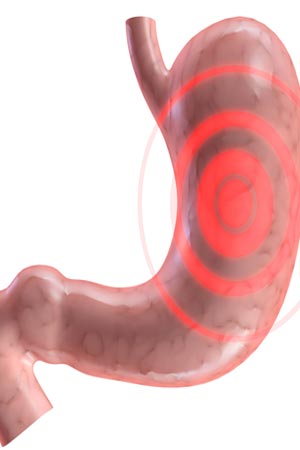 When the mucous wall is corroded, ulcers are formed in these linings. Generally, when the erosion in the mucosal wall is greater than 0.5 cm in size, it is considered to be a peptic ulcer. Based on the part of the G.I. tract that they are present, peptic ulcers are usually classified into two kinds:

The most common symptom of peptic ulcer is a burning sensation in stomach, which usually starts between or after meals and can be relieved for a brief period of time by taking antacids. A range of other symptoms can also be present, if a person is suffering from peptic ulcer.

A person suffering from peptic ulcers might experience episodes of reoccurring pain, which radiates to the back. This kind of pain can return in every few hours. Some ulcers do not produce symptoms for a long time and are detected very late. However, symptoms, such as blood in vomit, black tarry stool and sudden sharp abdominal pain should be taken very seriously. Though rarely seen, complications can occur in some cases of peptic ulcers. Some possible complications that can occur with peptic ulcers are:

Zollinger-Ellison syndrome is a rare condition that can cause gastric and duodenal ulcers. A person with this disease may have a tumor in the pancreas, which releases high levels of a hormone that increases the acid secretion in stomach.

Earlier, it was a common perception that ulcers are caused due to poor diet habits and stress. Now scientists have found out that the major cause of peptic ulcers is a bacterium called Helicobacter pylori, which is found in the G.I. tract. A large percentage of peptic ulcer cases are associated with Helicobacter pylori. Such cases can be treated by antibiotics to kill the bacteria.

Another leading cause of peptic ulcer is the long-term use of NSAIDs or non-steroidal anti-inflammatory medicines, such as aspirin and ibuprofen. Peptic ulcers are more common in people, who take pain killers frequently. Contrary to the popular belief, spicy food and stress do not cause ulcers, though they can worsen the problem if a person is already suffering from it.

If a peptic ulcer is suspected, a bacterial examination for the presence of H. Pylori can be done. The examination consists of breath test, stool test and blood test. When the presence of H. pylori is confirmed by the tests, possible treatment options are medicines that can reduce acid produced in stomach, or antibiotics. Combinations of certain antibiotics are given to kill Helicobacter pylori. Once the micro organism is successfully removed from the body, the symptoms of ulcers will go away and rarely come back. Proper treatment course must be followed strictly to prevent the infection from coming back. If H. pylori is not detected, other diagnostic methods may be used to find out the cause of ulcers. The diagnostic methods include endoscopy and X-ray.

For ulcers caused due to NSAIDs, drugs are recommended to reduce the acid production. Two kinds of drugs used for this purpose are H2 antagonists and Proton inhibitor pumps. Once a peptic ulcer is detected, the proper treatment course for the specific cause must be followed. If not treated properly, peptic ulcers get worse with time and might cause premature death in very rare cases. Surgical intervention might be needed, if the ulcers don’t heal properly. In case of medical emergencies like excessive bleeding or perforation of the stomach or intestinal walls, endoscopy is done to stop the bleeding. It can be done by injecting medicine or clamping the tear using metal clips.

Though poor diet is not identified as a cause of ulcers, some changes in the diet can help alleviate the associated symptoms. People, who smoke are at a higher risk of developing peptic ulcers, moreover, smoking can worsen the problem and slow the healing process if a person is already suffering from ulcers. Alcohol and Caffeine both have a tendency to increase the acidity in stomach, so these should be taken in moderation.  Spicy food should be avoided as it can cause irritation to the affected area. Large and heavy meals should be avoided as these stimulate the production of acid, and more acid flows into the stomach. Having smaller and more frequent meals have shown to help with the pain and symptoms.