Indian with a great population already suffers from many nutrient deficiency diseases; one of them is Vitamin D

Written by: Jigyasa NagpalPublished at: May 10, 2021Updated at: May 11, 2021
SHAREFacebook Twitter Whatsapp Koo
FOLLOWInstagram

The question of getting enough vitamin D has been lingering since the surge of pandemic. Sun, being the greatest source of Vitamin D, we all are now more deprived of it than ever. Vitamins being vital for immunity, some food sources can only fulfil the partial requirement as in case of Vitamin D. Including Maharashtra, a lot many states have been imposing intermittent lockdown to prevent people from going out. So, in case, we become deficient, what can this mean?

Given the situation, the focus is already on improving the immunity standards for which along with normal balanced diet, the supplementary nutrients that help the overall health of the individual are advised. When we can’t go out for the required sunshine vitamin, which is found in a very few foods, it is important to also see the deficiency does not occur and we include as much as of the same through the diet. Dr Harish Naik, Consultant - Neurosurgery, Hiranandani Hospital, Vashi-A Fortis Network Hospital has shared the importance of Vitamin D, its supplementation requirement and sources for including in the diet to prevent deficiency.

Dr Harish Naik points out that the vitamin D level of our population during pandemic has fallen less than 20 which are very less than the normal range of 30 and even lesser than India’s average before pandemic of 20-30. And hence the requirement is more than ever. 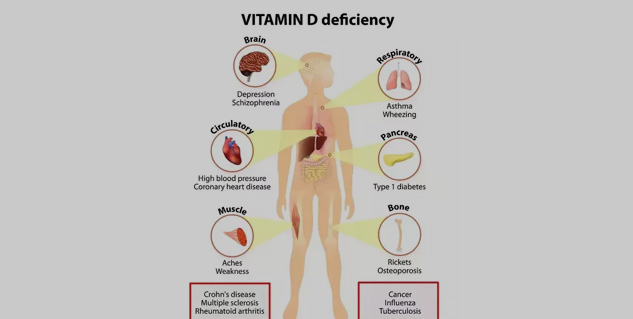 As pointed, vitamin D levels are already less in most of our population, the effects it can cause and has been causing, especially in this pandemic situation just cannot be ignored. Let’s see how Vitamin D is relevant to our health-

1) Mental Health- Many studies point out supplementation of vitamin D shows improvement in the symptoms for people in depression and a few other mental disorders.

3) Bone Health- The primary role of Vitamin D is to promote bone health by absorbing Calcium, and Phosphorus. And hence supplementation of Vitamin D and Calcium optimally helps with bone matter loss. Considering the fact that Indian women are already prone to bone related diseases, they would need this more now.

Check Vitamin D deficiency for yourself

Look for these symptoms

Also Read: How To Deal With Extreme Vitamin D Deficiency? Listen To What This Expert Has To Say

INCLUDE VITAMIN D IN YOUR DIET- START NOW

The natural sources include-

A regular monitoring of Vitamin D levels is helpful to check the decreasing/ increasing levels and hence the requirement of the same. Rely on as much food sources as you can for Vitamin D. Elderly and children are to be given more attention. Stay Healthy!

MORE FOR YOU
Eye Cancer In Children? Know Symptoms, Causes, Treatment Of Retinoblastoma
7 Grooming Items Every Man Should Carry
Want To Delay Periods Without Popping A Pill? Here Are 7 Home Remedies That Can Help
Did You Know About These Risks Of Reheating Cooking Oil? Check Out Risks And Ways To Avoid It
5 Ways To Impress Your Crush
TV Actress Chethana Dies Of Plastic Surgery Complications, Know Risks And Tips From Cosmetic Surgeon

Know Your Plate: Is Paneer Tikka A Healthy Starter Option?