Venom of Bee, Scorpion and Snake can help in Fighting Cancer

A team of scientists led by an Indian-origin researcher has found that snake, bee or scorpion venom can be soon used as a form of treatment to fight cancer.

Snake, bee or scorpion venom can be soon used as a form of treatment to fight cancer, find a team of scientists led by an Indian-origin researcher. The team has devised a certain method to target venom proteins that are specifically aimed at malignant cells while sparing the healthy ones that reduce or eliminate side-effects of toxins that may otherwise be caused. 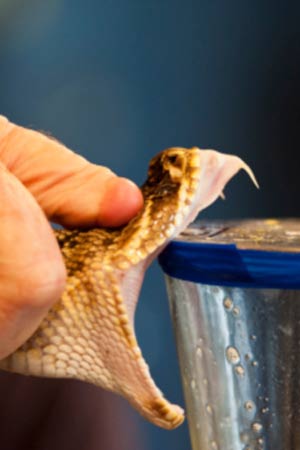 Dipanjan Pan  from University of Illinois at Urbana-Champaign, said, “We have safely used venom toxins in tiny nanometer-sized particles to treat breast cancer and melanoma cells in the laboratory. The particles that are camouflaged from the immune system deliver the toxins directly to the cancer cells, letting go of the normal tissues. The venom that is taken from snakes, scorpions and bees contains peptides and proteins that, when separated from other components as well as tested individually, can fix themselves to cancer cell membranes.

Pan said that some of the substances that were found in any of the venoms could be used as anti-cancer or anti-tumour agents. Just injecting venom into the patient’s body, however, can have side-effects. This made Pan and his team to set out to solve the issue.

In the honeybee study, the team identified that a substance in the venom of the species called melittin keeps the cancer cells from multiplying. The team then synthesized melittin in the lab and conducted computational studies. After this, they performed the test and injected their synthetic toxin into nanoparticles. Pap said, “The peptide toxins we made are so tightly packed within the nanoparticles that they do not latch out when exposed to the bloodstream and cause side-effects”.

What they do is move directly towards the tumour where they bind themselves to the cancer stem cells, thus blocking the growth as well as spread. The synthetic peptides that mimic components from venoms of other species, such as those from snakes or scorpions also work well in the nanoparticles as a possible cancer therapy.
The report was a part of the ongoing 248th national meeting of the American Chemical Society, which is the world’s largest scientific society in San Francisco.