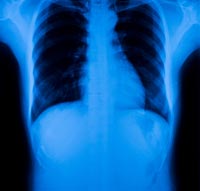 Yuvraj Singh, an Indian cricket all rounder, was last year diagnosed with mediastinal seminoma cancer. He underwent three sessions of chemotherapy, which have been successful to treat him completely with minute chances of relapse of cancer.

Doctors opt for surgery when chemotherapy has failed to completely remove the cancerous tissue from mediastinum. The doctor undertaking this surgery will remove the residual tumour (cancerous tissue that is left behind after chemotherapy). The residual tissue is checked for indications of active cancer. If such signs are present, the doctor may adhere to chemotherapy to treat the patient further. The type of surgery for mediastinal cancer depends on the location of the residual tumour and its closeness to the occupants of mediastinum such as main blood vessels, heart, windpipe and food pipe is also taken into consideration. A surgeon can give a well-detailed explanation of what this surgery involves and under what circumstances it is opted for.

Neurogenic Tumors, which are found in the back of the mediastinum are also treated surgically. Thymic cancers also require surgery, but it is followed by radiation or chemotherapy. Types of surgery for thymic germ cell tumour (a type of mediastinal cancer) are thoracoscopy, mediastinoscopy and thoracotomy (a procedure involving making of incision in the chest). Patients, who undergo surgeries, have rapid recovery and they do not need to stay for long in the hospital, unlike patients, who take chemotherapy or radiation therapy.

Radiation followed after chemotherapy appears to give effective results in improving mediastinal seminoma.  Patients, who underwent surgery, are advised with a course of postoperative radiation therapy in order to prevent local recurrence in the mediastinum. Radiotherapy for mediastinal seminoma cancer is same as radiotherapy for testicular seminoma. More than 60% patients of radiation therapy no longer possess any risk of reappearance of mediastinal germ cell tumour.