To Feel 10 Years Younger, Own a Dog

A new study done by researchers at the University of St. Andrews has found that owning a dog can make one feel and act about 10 years younger than their biological age.

There could be 100 reasons why you should own a dog and the 101st is that the canine will make you feel 10 years younger. Yes! A new study done by researchers at the University of St. Andrews has found that dogs can keep one active and make them feel and act younger. The study specifically found that dog owners over the age of 65 years act 10 years younger compared than their biological age. 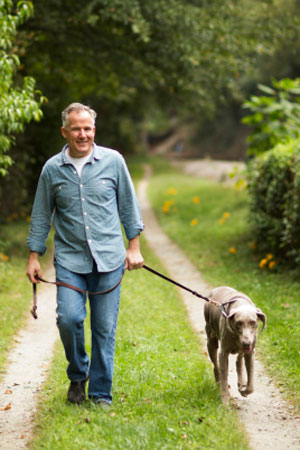 The study which was led by Dr Zhiqiang Feng found that owning a dog can also have a beneficial effect on the mental health of elderly people. Several studies that were done in the past have looked at the positive benefits of owning a pet on the elderly and some of these include fewer symptoms of depression, decreased blood pressure and heart rate.

This new study, however, is the first to look closely at the level of physical activity in people over the age of 65 years. "Our results show that dog ownership is associated with an increased level of physical activity in the over-65s. On average, older dog owners were 12% more active than their counterparts who did not own a dog," Feng added. Feng had monitored the activity of 547 elderly people in Tayside, Scotland, with an average age of 79. Of these who took part in the study, about 9 percent i.e. around 50 people, was dog owners and about 75 percent of these walked their dogs.

Feng said, “Our results suggest that dog ownership may motivate personal activity and enable older people to overcome many potential barriers such as lack of social support, inclement weather and concerns over personal safety”.