One of the more common signs of the cancer in the lymph nodes is that lymph nodes may feel hard or become enlarged.

Lymph cancer (lymphoma) is a cancer of the lymphatic system which immunes the body by fighting pathogens. 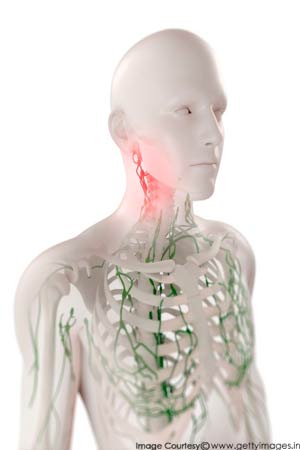 Cancer in the lymph nodes occurs in two ways – either starting in the lymphatic system itself or spreading there from some other site. More often, lymphoma starts in some other site and then spreads to lymph nodes. It hampers the functions of  lymphatic system which are to drain fluid back into the bloodstream from the tissues, filter lymph and filter blood and fight infections.

Symptoms of lymphatic cancer are:

It is one of the first noticeable symptoms of lymph node cancer. There will be swelling in the body parts where lymph nodes are close to the skin's surface, specifically the sides of the neck, the groin area and the armpits. These areas may appear like enlarged bumps or lumps. Swollen lymph nodes could be a symptom of another medical condition also, which is why you must look for other symptoms or bring it to the attention of a doctor.

According to a study published in the American Family Physician, lymph nodes that are enlarged from cancer may be painless but not always. The swollen lymph nodes which appear like enlarged bumps or lumps may cause pain in the spleen or chest.

The progression of lymph node cancer causes a patient to lose their appetite and weight subsequently. These symptoms are common in many medical conditions, therefore, a physician should examine the patient to rule out other such condition.

Fever and night sweats are common symptoms of the lymphatic cancer. Studies have defined night sweats as drenching, which often require changing clothes and sheets.

Itchy skin and cough with breathlessnes are among other signs of lymphoma. Cough with breathing problems may be accompanied by chest pain. According to Johns Hopkins Medicine, lymph node cancer may have some vague signs such as swelling of the legs and feet, a hoarse voice, bloating abdomen and lack of energy.

Recognizing the warning signs of lymph node cancer early improves the chances of treating the condition completely. If you are experiencing any of these symptoms, it is advised to seek medical advice immediately.