Start Bicycling and you will Find your Way to Happiness 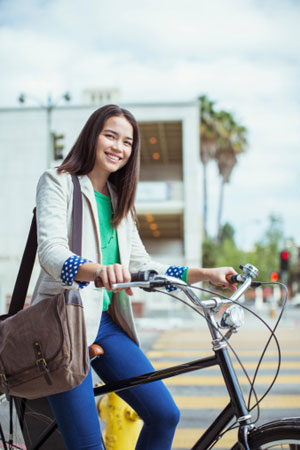 So, you were absolutely right when you thought that travelling by car everyday to work adds to your anxiety level. A recent study has found out that bicycling is the best way with which one can lift up their happiness quotient.

An assistant professor at Clemson University’s planning, development and preservation department, Eric Morris said “we found that people are in the best mood while they are bicycling compared to any other mode of transportation”.

People who use a bicycle to commute are very pumped up about the choice they make about their mode of transport.
Morris said “bicyclists are generally younger and physically healthy, which are traits that happier people usually possess”.

The study found out that the next most happy commuters are those who use a car, both as a passenger or as a driver.

People who commute by trains and buses have been found to be the people with the most negative emotions. The reason behind this can be the fact that the mass transit is used in disproportionately for commuting from work to home.

Morris added “understanding the relationship between how we travel and how we feel offers insight into ways of improving existing transportation services, prioritising investments and modeling the costs and benefits of travel”.

The data which was collected by the US Bureau of Labor Statistics as part of the American Tine Use Survey, was used by the researchers to analyze the mood of the commuters who used different modes of transportation.

According to the researchers, the findings of their study have positive implications for bicycles which are beyond the normally cited health and transportations ones.

The researchers have suggested it as important to improve the emotional experience as it is to improve the traditional features, such as headways and travel ways.