Sepsis infection is caused by excessive immune response to a pre-existing disease or infection. Know the risk factors involved.

All our systems are meant to work in a systematic way, and if they don’t then there is a fault which we consider as a health condition. Different health conditions are caused by different activities going on in the body or due to misconduct of any one part of it. Immune system is responsible to cover all the damage done in the body and bring it back to shape. However sometimes in this process, the immune response can overload and cause excessive chemicals to flow in the body which also results in a health condition. This excessive response of immune system and infection created by it is called sepsis. Today we will learn some important points as discussed with Dr. Rakesh Sharma, Senior Haematologist from B.N.K Hospital, Varanasi.

What is Sepsis Infection? 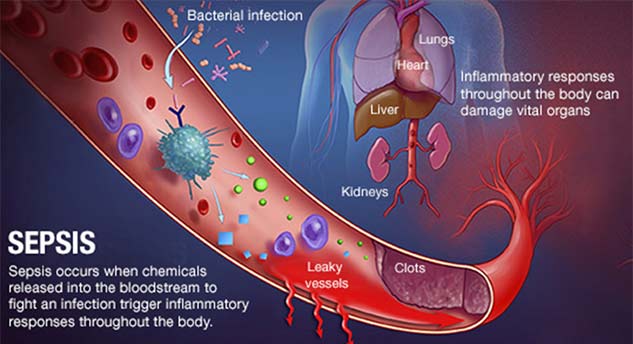 Sepsis generally happens when the patient is recovering from a disease or health condition and immune system reacts to it. But in some cases it could be more than that. Septic shock, severe sepsis and sepsis and three stages into which sepsis infection can be classified and hence depending on it the symptoms vary. The earlier you catch these symptoms and get treated, the more are the chances of you for getting to survive.

If you have any of these two symptoms then you should consult a doctor immediately.

This type of case happens during an organ failure mostly. These symptoms can occur if you have severe sepsis-

Symptoms of this are similar to sever sepsis. Septic shock is basically an advance kind of infection which is causes the person to go unconscious or in a state of shock. Low blood pressure is the only addition with symptoms of severe sepsis. 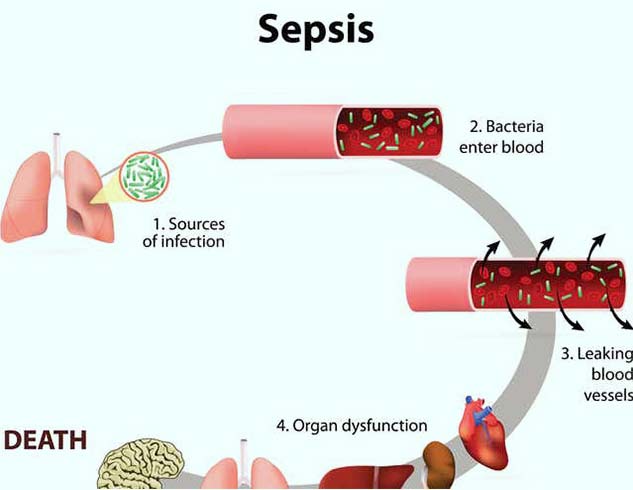 There could be a number of factors which can cause sepsis in a person. Some of the infection leading to sepsis can be-

The factors responsible to cause this type of sepsis are generally the underlying causes that increase the possibility of this disorder. It includes-

Who Is at Higher Risk For Sepsis?

Two categories of people are at high risk of developing sepsis, the new born babies and other the senior elderly. Both of them have comparatively weak immune system and are vulnerable to certain kinds of diseases and infections in body. Hence the chance of getting sepsis also increases in these two. Let us know both conditions in detail.

When the baby is infected with blood infection in its first month after birth which later results in sepsis, this condition is called neonatal sepsis. The severity is based on the timing of the infection, if the infection took place during childbirth or just after it. It can affect the immune system adversely. Immediate treatment in required in these cases. The newborns having sepsis can have low birth weight and premature birth. Symptoms of this can be hardly noticed at times, some signs can include the following-

Other symptoms are also present but are mostly unavoidable or not noticed well. Neonatal sepsis is actually a leading cause of death in infants. However things can change if the infection is diagnosed well before spreading. 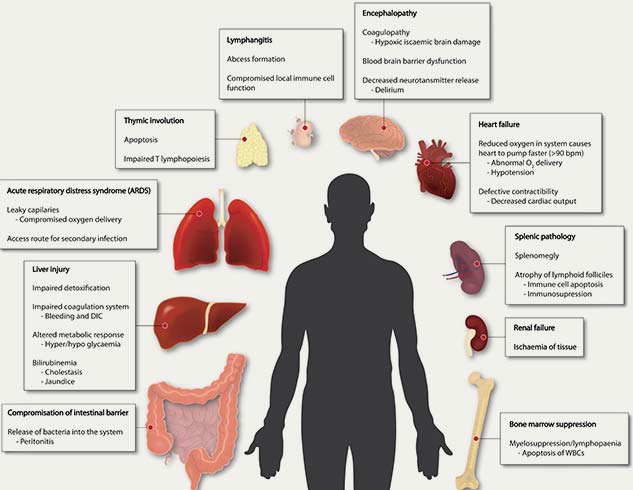 The immune system of senior adults weakens over growing age and hence increases the risk of sepsis. Also many of the elderly people suffer from some kind of underlying disease of health problem which further makes them at risk, especially those over 65 years of age. The risk increases when you have diabetes, HIV, kidney disease, high blood pressure, cancer or chronic illness. Thereafter the people build high tendencies to build sepsis infection.

Other infections might also affect the skin and result in skin tearing. Sepsis mostly results to confusion and disorientation of the body in the initial phases. The patient needs immediate medical care to restrain the sepsis infection.

Excessive immune response to a disease or infection causes sepsis infection. It is a blood infection which needs immediate care and treatment to avoid any fatality. The symptoms of this disease is not evident are therefore are hard to find. It can affect mostly elder people and young infants. In both cases the severity is determined by the underlying cause and period of time of infection. Sepsis infection has three stages and severe infection can even lead to death.

MORE FOR YOU
5 Plants That Are Good For Your Skin, Hair and Overall Health According To Ayurveda Expert
Top 10 Health Problems Faced By Millennials
How to Avoid Germs in Public Restrooms And Washrooms
What is Hypertensive Emergency? Know About Symptoms, Causes And Risks
Second Marriage Can Be A Life-Changing Decision For You, These Benefits are Proof
What Is Racial Trauma And How To Cope With It

6 Mistakes In Washing And Drying Clothes That Make You Sick