Spitting is an unhygienic practice that spreads air-borne respiratory diseases such as tuberculosis (TB), pneumonia and also influenza, according to doctors.

While TB or tuberculosis is raising its ugly head again, more than its new drug-resistance character, the root-cause has come under focus. The public spitting, a habit indigenous to India since the ancient times, still persists, say authroties and doctors. 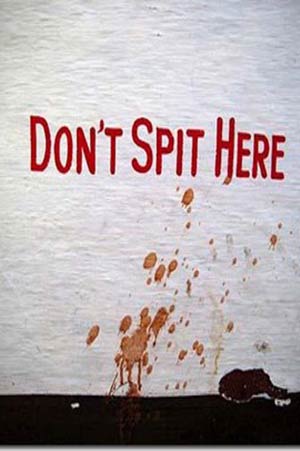 One of the worst offenders of public spitting are drivers of vehicles and paan-chewing public and no matter what the fine or warning, the habit goes uninhibited.

While smoking in public places has taken off of late, the public spitting still remains a menace and Prime Minister Narendra Modi’s Swachh Bharat campaign has included it in the agenda but no concrete effort has been made so far to curb it.

Maharashtra Health minister Deepak Sawant recently said that anti-spitting rules will be implemented soon in Mumbai with more stringent norms.”We are checking whether to bring in a new legislation or amend the existing one in the next session,” he said.

Mentioning taxi and auto drivers, the Maharashtra minister was more forthcoming.”A law against spitting in public places is already in existence and in Mumbai, the BMC acts against people who spit in public. But it is not that effective.”

To push for the implementation of the prohibitory acts, he said the law should be made more effective and stringent, with teeth to punish offenders. “We will also check if we can suspend driving licence of a taxi or auto driver who spits in public places like roads,” he hinted.

The Central TB Division numbers show that India has the highest burden of TB with two million cases reported every year. WHO’s Global Tuberculosis Report also underscored the fact saying that India has the second highest MDR-TB burden in the world with an estimated 64,000 cases in 2012.

Out of them, only 14,000 people with MDR-TB have access to the treatment to stay alive, said they need to stay alive, Dr Simon Janes, medical coordinator with Medecins Sans Frontieres (MSF) in India.

While the prblem of treatment of TB still persists in the country, the cause of TB should be eradicated first to ensure that the number of victims comes down. The public offenders can be monitored with CCTVs on road junctions and traffic signals for violation of traffic rules.

It is high time the public spitting should made a social offense and awareness should be spread among people, drivers and paan-chewers to stop spitting in the public and often spreading the TB knowingly or unknowingly. Punishing on the spot goes a long way, indeed.