Pathophysiology of diabetes mellitus is a complex syndrome that causes abnormal metabolism of carbohydrate. It results in deficiency of insulin in the body. 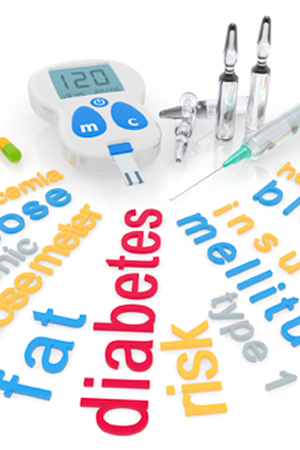 Pathophysiology of diabetes mellitus is related with the basics of carbohydrate metabolism and insulin action. Abnormal metabolism of insulin hormone is the primary cause for the development of this complex syndrome. In diabetes mellitus the body either fails to produce sufficient insulin or it responds abnormally to insulin. After consumption of food, the carbohydrates present in the food break down into glucose molecules. These molecules get absorbed into the bloodstream that results in the rise of blood sugar levels. Increased glycemia causes excessive discharge of insulin from the beta cells of the pancreas.

Excessive insulin discharge from the pancreas and cellular utilization of glucose lowers the blood sugar level (low hypoglycemia) and then it results in lowering insulin secretion. Decreased insulin production will reduce the glucose entry into the cells, which may result in hyperglycemia. In some cases, carbohydrate breakdown releases excessive glucose, which is then stored in the liver in the form of glycogen and serves as an energy reservoir for future use.

[Read: What is Type 1 Diabetes Mellitus?]

An autoimmune destruction of pancreatic beta cells is considered as a pathophysiologic defect in type 1 diabetes. This defect in type 1 diabetes causes absolute insulin deficiency in the patient as the body refuses to produce insulin. Environmental event like viral infection is the main reason for this autoimmune destruction of beta cells. Patients of type 1 diabetes, who remain severely hyperglycemic for longer period of time due to insufficient insulin or excessive glucose intake are prone to developing diabetic ketoacidosis (DKA).

In type2 diabetes, the pathophysiologic defect does not cause autoimmune beta-cell destruction. The defect is characterized by the three disorders:

[Read: How does Insulin Work in Type 2 Diabetes]

Tissue resistance to insulin is the first sign of this complex syndrome in type 2 diabetes, it is then followed by weaken insulin secretion. As the pancreas produces insulin in the body, the insulin resistance disorder prevents its proper use at the cellular level. This prevents glucose to enter the target cells and thus, it gets accumulated in the bloodstream, which results in hyperglycemia.

Ways to detect pathophysiology within the signs of diabetes.