Now, a Beer with No-Hangover

Now you may drink beer without dreading hangover or dehydration. Scientists have created a new beer to support water retention using electrolytes.

A beer has been created by Australian scientists which they claim can prevent dehydration and may end hangover. 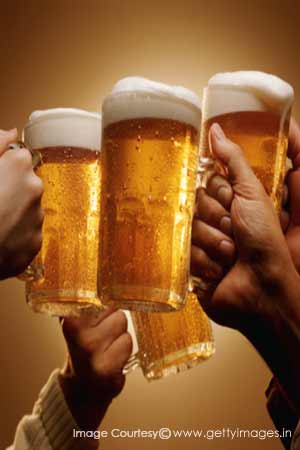 The alcohol content in beer goes out faster than water which increases dehydration, negating the positive nutrients resulting from beer’s plant origins and fermentation process.

Dehydration is one of the main causes of alcohol hangover.

The brew was created by adding electrolytes- minerals that keep body’s fluid levels in balance and are commonly added in sports drinks.

The creators- scientists at Griffith Health Institute (GHI) also had to reduce alcohol content in the beer to improve hydration.

"We basically manipulated the electrolyte levels of two commercial beers, one regular strength and one light beer and gave it to research subjects who'd just lost a significant amount of sweat by exercising. We then used several measures to monitor the participant's fluid recovery to the different beers," said Associate Professor Ben Desbrow from GHI's Centre for Health Practice Innovation.

"Of the four different beers the subjects consumed, our augmented light beer was by far the best retained by the body, meaning it was the most effective at rehydrating the subjects.

"The 'improved' light beer was actually a third more effective at hydrating a person than normal beer," Desbrow said.

"This is definitely not a good idea, but what we've found is that many people who sweat a lot, especially tradesmen, knock off work and have a beer; it's pretty normal. But alcohol in a dehydrated body can have all sorts of repercussions, including decreased awareness of risk," Desbrow said warning against drinking beer after strenuous exercise.

The results were published in the International Journal of Sport Nutrition and Exercise Metabolism.