Night Owls Smarter than Others

Research on teenagers by the University of Madrid found that night owls, who like to work at night, may be brighter than the much better-regarded early risers. 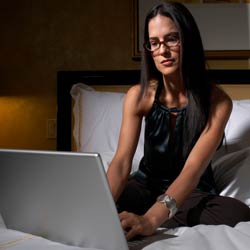 London: Early to bed and early to rise may neither make you wealthy nor wise, according to a new study. Research on teenagers by the University of Madrid found that night owls, who like to work at night, may be brighter than the much better-regarded early risers.

In scientific tests, evening types showed more of the kind of intelligence that has been linked to prestigious jobs and higher incomes. Larks or morning types, however, tend to get better school grades, possibly because lessons were at the wrong time of the day for night owls, The Independent reported on Sunday.

Researchers carried out tests comparing larks and night owls. The body clocks of some people make them evening types, night owls who stay up late and sleep in later in the morning. Others, the larks, are at their peak in the morning, going to bed and getting up early. Nearly 1,000 teenagers took part in the research which involved a battery of tests. These included measures of school performance and inductive intelligence.

Around one in four of the teenagers were classified as morning types, and 32% as night owls, with the remainder fitting neither profile. The results showed that evening types scored higher than morning types on inductive reasoning, which has been shown to be a good estimate of general intelligence and one of the strongest predictors of academic performance.

A further piece of good news for the owls is that inductive reasoning is linked to innovative thinking and more prestigious occupations, and tends to earn higher incomes.

One theory to explain the extra brain power of night owls is that intelligent children are more likely to grow up to be nocturnal because in ancestral times any activities at night would have been novel and would, therefore, have been more likely to attract people with inquisitive minds.