If you limit the amount of time your kids spend on the computer or in front of the TV, they are likely to perform better in school, have better sleep, and behave better.

Parents sometimes do not realise how fixing the children’s screen time can work for their good. It not just ensures them more sleep, but enables them to do better in school, behave properly, and prevents obesity.

A study done by Douglas Gentile, lead author and an associate professor of psychology at Iowa State says that the effect of limiting content and the amount of time their children spend on the computer or in front of the TV has more power than the parents realise.

“When parents are involved it has a powerful protective effect across a wide range of different areas that they probably never would have expected to see,” Gentile said. “However, parents aren’t likely to notice that putting limits on the children’s media is having these effects seven months later.”

This doesn’t mean that parents should completely eliminate the screen time. However, counting time spent on a computer at school, even small changes can make a big difference.

The study found there is a ripple effect associated with the benefits of limiting both screen time and media content. Gentile is not surprised to see a direct impact on sleep, academics and behavior. However, limited screen time also indirectly affects body mass index. 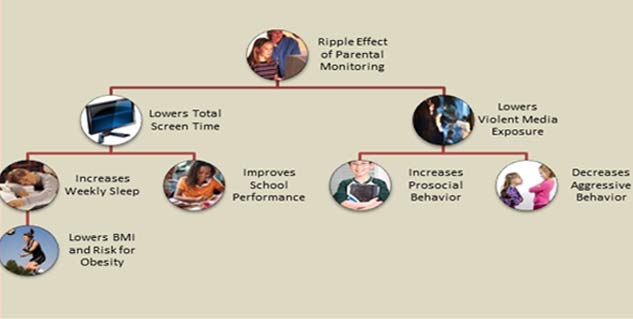 “As parents, we don’t even see our children get taller and that’s a really noticeable effect. With media, what we’re often looking for is the absence of a problem, such as a child not gaining weight, making it even more difficult to notice,” Gentile said.

“Even with changes that we do notice, we really don’t recognize in the moment how all these things are related to each other across time,” he added. “Yes, as screen time goes up, school performance goes down, but that doesn’t happen overnight. If I watch a lot of TV today, I don’t get an F in my class tomorrow.”

The American Association of Pediatrics recommends no more than one to two hours of screen time a day for children two years and older. These recommendations are far exceeded in reality, which might explain why doctors feel it is futile to talk with parents about guidelines for media use, Gentile said. The study provides further evidence of why pediatricians need to have that conversation.