There are certain types of fried foods that leads to the risk of forming cancer causing chemicals in the body. Know what these foods are and how you can avoid them. 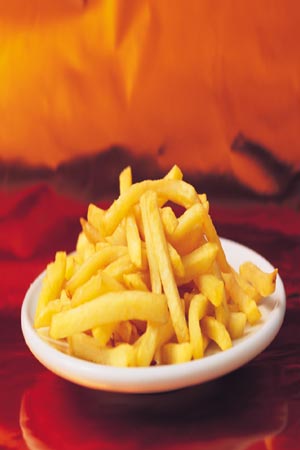 Reducing consumption of certain types of fried foods could help you to lower the risk of forming cancer causing chemicals in your diet.

Acrylamide whose high levels have been found to be the cause of cancer among animals can form in some foods such as potatoes, crackers or breads, dried fruits and coffee. This happens during high temperature cooking processes such as frying and baking. Acrylamide has been found in 40 percent of the calories that are consumed in the diet of an average American. The numbers could be around the same for people of most nations.

Food and Drug Administration’s chemist Lauren Robin said in an agency news release, "Generally speaking, acrylamide is more likely to accumulate when cooking is done for longer periods or at higher temperatures." Now because acrylamide is common in foods, it is not feasible to eliminate it from the diet. But one can definitely do a lot to reduce the amount of acrylamide consumed. Lauren Robin has suggested that when frozen French fries are being fired one must follow the manufacturer’s recommendations and that these must be fried until it is golden yellow rather than brown, and bread must be toasted to light brown rather than dark brown.

Acrylamide is not a recent phenomenon and has been around for a long time, but it was only in the last 10 years that scientists first discovered the chemical in food.