How Fast Does Diabetes Develop

Diabete is a lifetime disease that develops over a period of time. Learn how it develops, here. 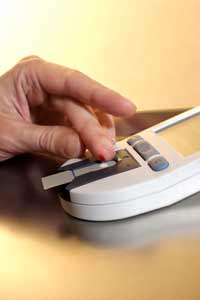 Diabetes is of two types, namely, type 1 and type 2. It is a lifetime disease that does not develop overnight. Here is a comprehension on how each of the two types of diabetes develops.

Type 1 diabetes develops within 5-10 years after the beta cells in the pancreas stop producing sufficient amount of insulin. Beta cells are the kinds of cells located in the islets of Langerhans. They make about 65-80% of cells that exist in the islets. The beta cells are responsible for storing and releasing insulin, which is a hormone that controls the level of glucose that is in the blood. While the liver maintains the base-line glucose level, the beta cells respond quickly to a spike in glucose level by releasing stored insulin and simultaneously producing. Type 1 diabetes is caused when there has been a destruction of the insulin-producing beta cells by cells that belong to the immune system. It has been observed by doctors that an autoimmune response gets triggered in the body by way of which the white blood cells attack insulin secreting beta cells, thereby destroying them. Usually, Type 1 diabetes can occur at any age, though it is common in young children and adolescents. Although, the real cause of type 1 diabetes is unknown, genetics and environmental factors are held responsible for the disease to develop.

Type 2 diabetes is a non-insulin dependent type of diabetes that does not develop overnight, but because of a lifestyle of improper and unhealthy diet, inactiveness, indulgence in smoking and alcohol. As an individual develops an inactive lifestyle over the years, the sugar level in his or her body increases and becomes resistant to insulin. Although, the pancreas continues to produce insulin, it fails to either keep up with the level of glucose in the blood or to get optimally utilised by the cells of the body. During and after a meal, the digestion process breaks proteins down into amino acids and carbohydrates down into sugar molecules. Soon after the meal, the amino acids and glucose get absorbed into the blood increasing the level of blood glucose. This rise in blood glucose level signals the beta cells to release insulin. Therefore, the level of insulin after meals is at its highest level. Insulin lets the glucose levels to enter different cells of the body where it along with other hormones decide whether the glucose is to be burned to produce energy or stored for future use. When the insulin levels are high in the bloodstream, the liver stops producing glucose and stores it to be used when need be. When the glucose levels are high, the pancreas stops producing insulin. Sometimes, the level of glucose in the blood becomes too high for the insulin to take all of it to the body cells, giving rise to type 2 diabetes.