How Does Lung Cancer Spread 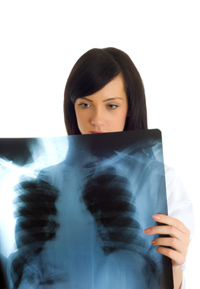 Lung cancer spreads as a result of cancer cells break off from the tumour, spreading either through lymphatic system or bloodstream. This process of spreading is ascribed as metastasis.

It is highly likely that lung cancer spreads through the lymphatic channels. Through the bloodstream and other portions such as spleen and bone, the cancer form can attack any part of the body. Among other areas for lung cancer to spread are adrenal glands, liver, and brain.

On malfunction and mutation of DNA of cells within lungs, lung cancer tumour starts to form. Several reasons have been associated with abnormal cell behaviour like toxic exposure from chemicals in cigarettes or industrial chemicals. Due to DNA mutation, cell is not able to grow in the usual manner. Eventually, uncontrolled cells form a large mass known as tumour.

Lymph System is the commonest mode to spread lung cancer. Lung cancer tumour, formed in the lungs, break off into small pieces. These pieces travel through the lymph system, infecting the lymph nodes and making an impact on other portions of the body such liver, heart and brain.

On reaching other areas of body, cancer cells seek unaffected blood vessels. Thereafter, the cells get attached to body's blood and nutrient supply. In this manner, cells grow at a rapid pace, sometimes forming a tumour in other part of the body as well.

Bloodstream is another way by which lung cancer can spread. Cells breaking from primary tumour also pose risk to affect other parts of the body. Identical to the lymph system, bloodstream carries affected cells all over the body through blood channels. In this manner, lung cancer gets migrated from lungs to other important parts of the body. This step is followed with formation of secondary tumours in a new location.