How Does Bone Cancer Start?

Bone cancer starts from the abnormal multiplication of cells that lead to dysfunction of the normal body functions. 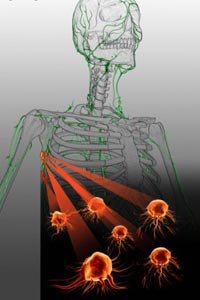 Abnormal multiplication of cells in the body leads to cancer. The various types of cancer are based on such a dysfunction in a particular body part, such as the bones. The various mechanisms that control the normal growth, division and elimination of cells in the body cease to function due to certain mutations in the cells that thwart normal cellular functions. The result of such a malfunction of cells is the development of tumours and even invading other body parts.

Scientists are not sure about the real cause of such a malfunction of the cells that cause bone cancer, but genetic factors have a role to play. The most common form of bone cancer is secondary bone cancer, i.e. on that originates in some other body part and spreads into bones. Although, it is not actually bone cancer but since your bones are getting affected and the treatment would involve surgeries or radiations on the part of the bone that is affected, it has been termed secondary.

The primary bone cancer is one that originates in the bone itself. These have been categorised into three categories: osteosarcoma, chondrosarcoma, and the group of cancers under Ewing sarcoma. Osteosarcoma originates in the bone’s hard substance, i.e. the major bulk of the bone. Chondrosarcoma is the cancer that occurs in cartilages and connective tissues. Ewing sarcoma cancers cause the growth of tumours which are composed of soft tissues such as fat, but they can originate due to malfunction of the bones.

Apart from genetic predisposition, certain conditions can lead a person towards getting afflicted with this disease. One such condition is the Paget’s disease of the bone, and another is effect of radiation on people who have received a lot of radiation treatment.

Another cancer related to the bones is the bone marrow cancer. Despite the fact that it is a form of blood cancer, the bone marrow of the patient is affected in this disease. The blood vessels that come from the base of the bones where the bone marrow lies cause this condition in patients. The abnormal multiplication of cells is the same in this cancer as in others. Although bone cancer is different from bone marrow cancer, it should be mistaken that having means you cannot suffer from the other. Treatment of bone cancer depends on how early it is detected.