Know how cinnamon helps prevent diabetes, some facts need to be understood well. Preventing diabetes with precision may seem like a challenge for many. 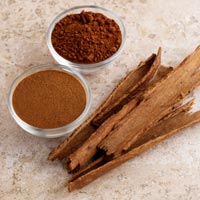 Managing and controlling diabetes with precision may seem like a challenge for many. A simple lifestyle and attitudinal changes, however, can actually make a huge impact. Apart from only resorting to effective medication for managing blood sugar levels, one must also make use of herbs and seasonings that help in managing blood sugar levels effectively. One such effective seasoning agent is cinnamon. Apart from lending a distinctly endearing taste to the dishes of your choice, cinnamon is also known for its promising medicinal qualities, the foremost being regulating blood sugar levels. To understand how cinnamon helps prevent diabetes, some facts need to be understood well.

Some of the ways in which cinnamon helps in preventing and managing diabetes include:

If you are suffering from a specific health complication, however, make sure you seek complete guidance from your doctor before resorting to extensive usage of this seasoning. Any new inclusion in diet must always be ratified by your doctor.