Glass of Apple Juice as Unhealthy as a Chocolate Bar

A recent survey revealed that many seemingly healthy foods like apple juice contain sugar as much as found three donuts or a bar of chocolate. 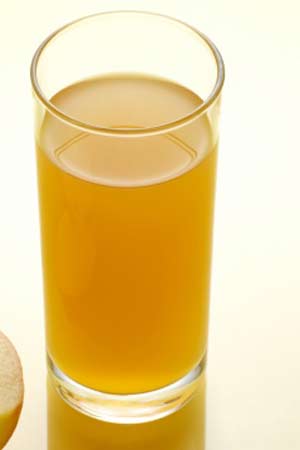 A survey found that most people are unaware of the fact that glass of healthy apple juice contains as much sugar as three donuts or a bar of chocolate.

The seemingly healthy apple juice contains almost seven teaspoons of sugar in a single serving, which is more than the recommended amount for adults who wish to stay healthy.

According to the World Health Organisation, this should be six teaspoons of 'added' sugar - i.e. not that found naturally in products such as milk.

Also, the fat-free yogurt which is considered to be a healthy choice contains five teaspoons of sugar, which is the same as found in three scoops of ice cream.

This survey to reveal the actual amount of sugar in the seemingly healthy foods was carried out by Bupa.

In this survey, 2,000 mothers were asked if they were aware of the amount of sugar found in foods they may be feeding their children.

More than 90 percent of the women admitted to have been unaware of the high levels of sugar in apple juice and fat-free yogurt.

According to Bupa, an average glass of concentrated apple juice contains almost seven teaspoon of sugar.

Almost half of the mothers showed concern over their child being addicted to sugar.

However, one-fifth still confessed that their child does not eat a balanced diet. And, 60 percent agreed that they did not take care of the nutritional chart on food.

Despite the hazardous effects of sugar on a child’s health, 40 percent mothers confessed that their children consumed sweets, fizzy drinks or chocolates at least once a day.