All the genetic mutations associated with the blood cancer acute myeloid leukaemia (AML) have probably been identified, claim researchers of Genome Institute at Washington University School of Medicine. 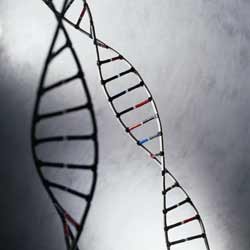 Nearly all the genetic mutations associated with the blood cancer acute myeloid leukaemia (AML) have probably been identified, researchers report.

"We now have a genetic playbook for this type of leukaemia," study co-leader Dr. Timothy Ley, associate director for cancer genomics at the Genome Institute at Washington University School of Medicine in St. Louis, said in a university news release.

"We don't know all the rules yet, but we know all the major players," Ley said. "This information can help us begin to understand which patients need more aggressive treatment right up front, and which can be treated effectively with standard chemotherapy."

The study included about 200 AML patients. Ley and his colleagues analyzed the DNA of each patient's leukemia cells and compared it to DNA from their healthy cells. Doing so enabled the researchers to pinpoint the mutations that occurred only in the cancer cells and contributed to the development and progression of AML.

Cancer cells in the AML patients had an average of 13 mutated genes, far fewer than the several hundred typically found in breast, lung and other solid tumors, according to the study, which was published online May 1 in The New England Journal of Medicine. Because the study included a large number of AML patients, the researchers believe they have found nearly all of the major mutations linked with the disease.

The findings could lead to improved treatments for AML patients, as well as ways to more accurately predict the severity of disease in individual patients. AML is a fast-growing cancer that often is difficult to treat.