Flat Skull Spot in Most Babies

Most babies form a flat skull in their early months because of lying on back. It is not a medical condition but can affect the kids’ growth psychologically. 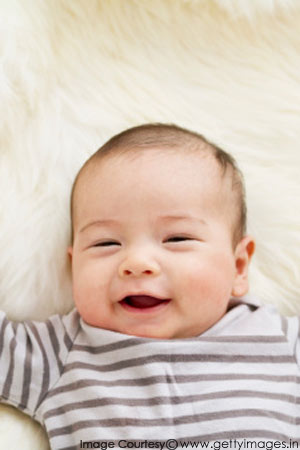 A flat head shape is not medically dangerous but can have psychological implications for kids, if it becomes permanent.

"This is super common," said Dr. Lisa Stellwagen, a neonatologist from the University of California, San Diego School of Medicine, who has studied what's known as plagiocephaly (a malformation of the head marked by an oblique slant to the main axis of the skull and usually caused by closure of half of the coronal suture).

"With the Back To Sleep (campaign) and the overuse of car seats, and people not holding their babies like they used to, we've sort of rediscovered this problem with infants' head shapes," Stellwagen, who wasn't involved in the new study, added.

Paediatricians in the early 1990s began telling parents to put their babies to sleep on their backs, in an effort to prevent Sudden Infant Death Syndrome (SIDS), also known as crib death.

That campaign was "enormously successful," Stellwagen said - and the new findings do not mean parents should stop following that advice.

But there are steps they can take - such as holding their baby as often as possible and having "tummy time" when the baby is awake and supervised - to limit skull deformations, she added.

For their study, Aliyah Mawji from Mount Royal University in Calgary, Alberta, and her colleagues examined the heads of 440 healthy infants seen for their two-month well-child visit at one of four clinics.

They found that 205 babies, or about 47 percent, had some sort of head deformation visible to the naked eye. More than three-quarters of those were mild, the researchers wrote Monday in Paediatrics.

Some research has tied plagiocephaly to delayed crawling or rolling over, but babies tend to catch up by 18 months, Mawji said - so it's the potential for being bullied as a child that's more of a concern.

She said the deformation can be corrected with a helmet - but those typically cost $1,000 to $3,000, so they should only be a "last resort."

For young babies, treatment for a flat spot looks a lot like prevention, researchers said.

"You want to vary the side of the head that you're putting your infant to sleep on," Mawji told Reuters Health. "If their head automatically turns to the right … what you need to do the next night is turn their head to the left."

Like Stellwagen, Mawji recommended parents keep their baby out of a car seat when they're not driving. She also said they should alternate the hand they hold the baby in while feeding.

Parents might not notice a small head deformation because they get used to how their baby looks, Stellwagen said, so it's important for doctors to take a close look at the skull at early well-child visits.