Expert Talk: Lung Cancer Symptoms & At What Stage It Can Possibly Be Cured

Lung cancer is the most common cancer diagnosed worldwide. Read ahead to know more.

Overlapping clinical presentation with various other non-malignant disorders can lead to a late diagnosis of cancer. Therapeutic choices, particularly curative surgical options, are limited. Diagnosis at an early stage may improve this scenario, especially in view of currently available theragnostic and management modalities.

Signs and symptoms of lung cancer include intractable cough, breathlessness, chest pain, hoarseness of voice, unexplained weight loss, loss of appetite, and blood in the sputum. Any of these complaints can be seen in various other respiratory disorders including infections like tuberculosis, pneumonia, or allergic conditions like asthma. Some of these may also be experienced as a part of cardiovascular diseases.

Often a tumour is detected when it has already spread beyond lung boundaries. So enlarged lymph node in the neck, pleural effusion, pain in the backbone or hip, nervous system problems like headache, convulsions, eyelid drooping, jaundice due to liver spread, problems of blood circulation due to thoracic inlet obstruction, and others may lead to presenting complaints. Other rare manifestations of lung cancer are related to the production of hormone-like substances by tumours.

Bronchoscopy, where the scope is passed to visualise the trachea and bronchi, is useful to take biopsy samples from suspicious areas. EBUS and EUS are endoscopy techniques where a needle is passed under ultrasound guidance so that the biopsy is well targeted. The lesional sample can be obtained as EBUS/EUS fine needle aspiration cytology (FNAC). However, needle core biopsy is preferred whenever possible, as  biopsy can be processed also for immunohistochemistry and molecular techniques. 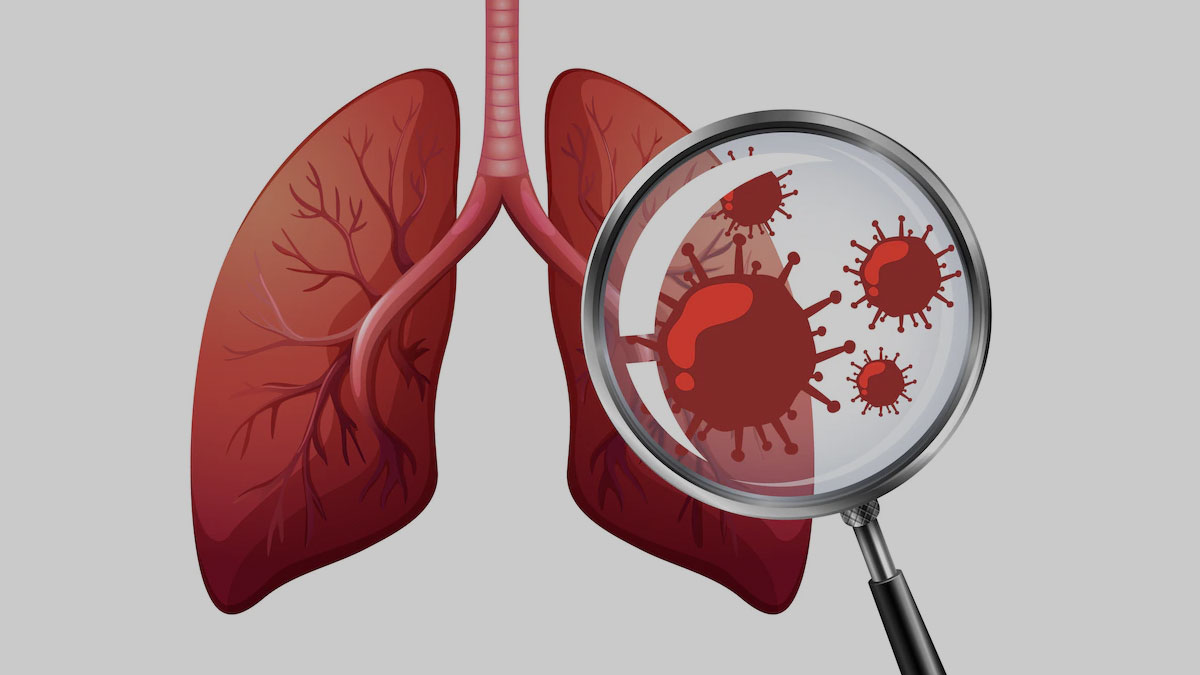 Sputum, bronchial lavage, and pleural effusion (when present) are commonly tested cytology samples to detect detached malignant cells from surfaces. The sensitivity of cytology testing can be improved by cyto-centrifugation, liquid based on cytology techniques. The purpose of cytology and/or histopathology tests is to confirm lung cancer, classified as per the type of tumour cells and detect certain receptor molecules in malignant cells for therapeutic utility. When cancer is detected in the lung, it is necessary to rule out the presence of cancer elsewhere and involving the lung secondarily (metastasis).

Immunohistochemistry is often useful to confirm primary lung cancer and rule out metastasis. Adenocarcinoma, squamous cell carcinoma, and neuroendocrine carcinoma including small cell carcinoma are the main subtypes of primary lung cancer. Depending on the type of cancer, further molecular tests are done. Some of these include amplification (eg. EGFR, HER2), mutation/fusion (eg. ALK, ROS1, BRAF) for targeted therapy with specific inhibitors, and PDL1 expression for immunotherapy.

Lung cancer is often detected at an advanced stage. Cancer cell type and stage at diagnosis are important to plan management. In India, the overall 5-year survival rate for lung cancer is 10%. The one-year survival rate is 87.3% for stage 1 and dips to 18.7% for stage 4. Radiological screening of high-risk populations has been suggested for the early diagnosis of lung cancer. In the early stages of non-small cell cancer, chemotherapy can be used with surgery.

Chemotherapy affects both normal cells and cancer cells and side effects need monitoring.  In the advanced stages of non-small cell cancer and in all stages of small cell cancer, chemotherapy and targeted therapies may be useful. Radiation therapy can be used as a primary treatment, or in combination. Every attempt should be made to prevent lung cancer by avoiding cigarettes and exposure to chemicals, eating healthy food, regular exercise, and a proper lifestyle.