What Causes Gaps Between Teeth? Causes and Treatment

If you have visible gap in between your teeth, consult a dentist to find out root cause and how it can be treated.

Smiles with white teeth evenly spaced and aligned on the dental arch are beautiful to look at. Smiles like those give people more confidence and can contribute to success in personal and professional lives of individuals. But what if you get gap between teeth? This looks unpleasant and also cause a lot of trouble while eating. Dr. Kundabala Mala, Professor,Department of Conservative Dentistry and Endodontics, Manipal College of Dental Sciences, Mangalore, Manipal Academy of Higher Education, Manipal explains diastema meaning, its causes and how this can be treated.

Diastema refers to teeth with unusual presence of gaps between teeth, especially in the anterior part of the dental arch. It is one of the most common problems encountered in clinical dentistry. Diastema can be diagnosed when a patient has a gap greater than 0.5 mm between the proximal surfaces of the two central incisors. These gaps create esthetic problems and phonetic problems if they exist in the anterior region. When diastema exists in the posterior region of the oral cavity, it may contribute to the faster progress of gingival disease due to food impaction between teeth.

What Causes Gaps Between Teeth?

Various factors that can lead to gaps between your teeth are: 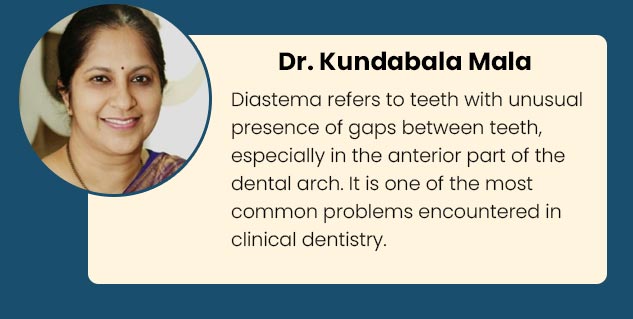 Treatment for diastema widely varies depending on its underlying cause. Most people consider diastema a cosmetic issue until and unless it causes a severe problem like gum disease. Some common treatments for diastema include; Braces are wires and brackets that exert pressure on teeth for them to move together into their usual position. They are the most common treatment for diastema. In recent times, invisible or removable braces have gained popularity. Veneers are also another option to fill gaps to improve the teeth.

In severe diastema cases, doctors may recommend surgery before orthodontic treatment, especially if the condition is due to a large or low frenum or a cyst. Surgery does not guarantee that the gap will close, and other treatments may be required to treat diastema completely.

Some less invasive treatments include antibiotics. This can be in the form of mouth rinses or gels. Scaling also helps remove bacteria from your teeth and your gums. In cases of children, the gap often closes on its own as they grow older. It is recommended to consult a dentist and get your teeth evaluated. While there are various treatments available for treating diastema, it is recommended to reduce the risk of developing a gap in the first place. Some ways to prevent diastema include:

It is okay to have gap in between teeth unless it is not causing you any trouble. If it is, consult a dentist to look for possible treatment options as per the cause.

Hartnup Disease: Know Symptoms And Causes Of This Rare Condition