Dengue is Fatal in Less than One Per Cent Cases

Dengue has a sudden onset with symptoms such as headache, fever, exhaustion, severe joint and muscle pain, swollen glands and rashes. The presence of fever, rashes and headache along with other symptoms is particularly characteristic of dengue.

Dengue is a disease caused by a family of viruses which are transmitted by mosquitoes. It has a sudden onset with symptoms of a headache, fever, exhaustion, severe joint and muscle pain, swollen glands and rashes. The presence of fever, rashes and headache along with other symptoms is particularly characteristic of dengue.

How is Dengue contracted?

The dengue virus is contracted from the bite of a particular mosquito that has previously bitten an infected person. The mosquito flourishes during the rainy season but can also breed in water-filled flower pots, plastic bags, water bodies, cans etc. all year round. One bite of such mosquito is sufficient to cause the disease.

The virus is not contagious and cannot be spread directly from person to person. There must be a person-to-mosquito-to-another person pathway.

Dengue strikes people with low levels of immunity. As it is caused by one of the four types of virus, it is possible to get dengue fever multiple times. However, an attack of dengue produces immunity for a lifetime to that particular type to which the patient was exposed. 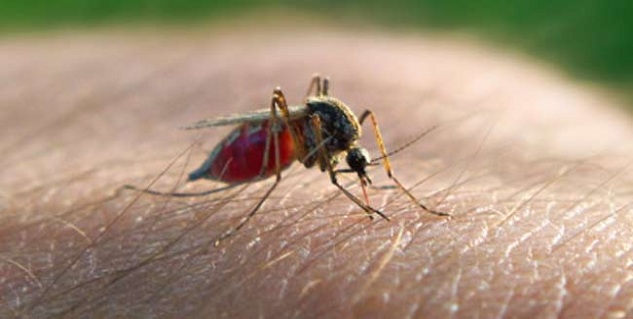 After being bitten by a mosquito carrying the virus, the incubation period ranges from three to 15 (usually five to eight) days before the signs and symptoms of dengue appear. Dengue starts with chills, headache, pain upon moving eyes and low backache. Painful aching in legs and joints occurs during the first hours of illness. Temperature rises quickly as high as 104° F (40° C), with relatively low heart rate and low blood pressure. Eyes become reddened. A flushing or pale pink rash comes over the face and then disappears. Glands (lymph nodes) in the neck are often swollen.

Fever and other signs of dengue last for two to four days, followed by the rapid drop in temperature with profuse sweating. This is followed by a period with normal temperature and a sense of well-being that lasts about a day. A second rapid rise in temperature follows. A characteristic rash appears along with the fever and spreads from the extremities to cover the entire body except for the face. The palms and soles may be bright red and swollen.

Dengue hemorrhagic fever is a more severe form of the viral illness. Manifestations include a headache, fever, rash, and evidence of hemorrhage in the body. Small red or purple blisters under the skin, bleeding in the nose or gums, black stools or easy bruising are all possible signs of hemorrhage. This form of dengue fever can be life-threatening.

How is dengue fever treated?

As dengue is caused by a virus, there is no specific medicine or antibiotic to treat it. For typical dengue, the treatment is purely concerned with the relief of symptoms. Rest and fluid intake for adequate hydration is important.

What is the outcome with typical dengue?

Typical dengue does not result in death. It is fatal in less than one per cent of cases. The acute phase of the illness lasts about one to two weeks. Convalescence is accompanied by a feeling of weakness and full recovery often takes several weeks.

How can dengue be prevented?

MORE FOR YOU
Know About The Importance And Functions Of Milk Teeth From A Dentist
5 Tips To Prevent And Tackle Urinary Tract Infection
Flat Feet Exercises: Try These 5 Exercises For Permanent Cure
What Are Eye Floaters? 5 Methods By Expert To Treat This Condition
Get Glowing Skin With These 3 Hand Mudras
5 Tips You Need To Follow While Coloring Hair During Pregnancy