Dealing With Stress at Work

A stressful job can pay off in more ways than just a good paycheck and a neglected partner – researchers have proven that one in 20 cases of depression or anxiety annually is attributable to high stress at work. 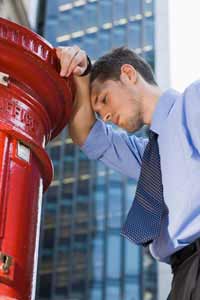 A stressful job can pay off in more ways than just a good paycheck and a neglected partner – researchers have proven that one in 20 cases of depression or anxiety annually is attributable to high stress at work. To add to that, statistics have shown that one in five individuals will experience depression during their adult lifetime.

Stress at work is caused by various factors such as meeting deadlines, dealing with the amount of work, pressures of competitive performance and angling for a promotion or appraisal. In this vein – chefs, construction workers and editors have the most stressful jobs. Looking after children at home - much to the consternation of home-makers - has been reported by a study to be the least stressful job, because of the absence of time pressure, rigidity and fear of public failure.

Another report has also noted the difference in how both sexes are stressed out by different factors. Men who reported high job strain were more than twice as likely to suffer depression as men who were low on the job-strain scale. "High job strain" is defined here as work that is demanding and leaves people little independence or decision-making authority.

That work-related stress is the cause of other medical conditions like high blood pressure and heart disease is a fact embraced more widely than its effect as depression both by employers and employees.

Sometimes, there is an inability or unwillingness to view depression as an illness by employers and managers, resulting in overt and covert discrimination. Employees who have informed their organization of their depressive illness, have often found that they have been undermined by their employers or fellow employees, or, in some cases, excluded from promotional prospect. Some employers have a common belief that there are no effective treatments, which may have resulted in a failure to address depression in the workplace.

All of these studies point towards the need for all corporate organizations to recognize this issue as important and work towards helping their employees – and not just for the latter’s sake. The organization itself can reap more profits from a mentally fit and enthusiastic workforce than employees with complaints of depression.

Some morale boosting techniques that can be ‘employed’ are –

Physical Environment - Our workplace can be affected by such things as poor indoor air quality and pollution, inadequate lighting levels, poor ergonomics and irritating noise levels, all of which can create stress and affect health. Such things need to be taken care of to lessen pressure on the employees.

Office Counselor – Corporate psychology is a field in itself, and companies that hire a trained mental health professional can help keep the blues far away from the employees. Consultation with the psychologist during moments of acute stress and pressure can stop depression from sinking in.

Workplace Culture – It goes without saying that our environment affects how we work. A highly rigid workstation can add to the work pressure and can adversely affect the employees. More and more corporates are now opening up to the idea of a more relaxed setting to ensure that the employees work with ease. For instance, occasional activities like quizzes, theme-based dress codes, and inter-team dance or drama competitions and so on.

Leaves and Trips – A hard-working team needs to be handled with care, and must not be made to work their noses to the grindstone, especially if they are already showing symptoms of stress. Shorter office hours or an occasional team outing like a picnic or the pub can work wonders.

The effects of depression, whilst personal, can influence the workplace in a profound way too.  Employees, who are otherwise skilful and highly productive, may start to take more time off 'unwell' and become less productive. Absenteeism and presenteeism can both have harsh consequences - financially and through a reduction in human resource - on any business or organization and in order for this to be avoided, it is important that employees living with depression are supported.