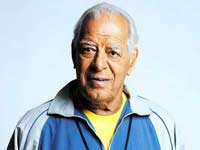 World champion wrestler-turned-actor, Dara Singh died at his home on Thursday morning. 84-years old Singh, who was admitted to the Kokilaben Ambani hospital, had suffered a cardio-respiratory arrest last week.

To respect his wish to breathe his last at home,  he was taken  back home last night after the doctors declared that he had the least chances of recovery due to brain damage caused by cardiac arrest.

Ever since Singh was hospitalised, he was kept on ventilator and was undergoing dialysis due to kidney failure. Doctors kept him on high dose of medication to control his fluctuating blood pressure, but his condition showed no signs of improvement. After battling illness for one week, he breathed his last at 7:30 am today at his Mumbai residence.

The veteran actor entered Bollywood in 1950s and is known for his role as Hanuman in Ramanand Sagar's epic television series 'Ramayan', “King Kong” and “Faulad”. He made his last appearance in “Jab we met” alongside Kareena Kapoor and Shahid Kapoor. He was a 1968 Commonwealth champion wrestler and served as a Rajya Sabha member from 2003 until 2009.