Antibacterial Soap could be Doing more Harm than Good

A new study has revealed that the use of antibacterial soaps could be jeopardising women's foetuses and at the same time may be harming newborns. 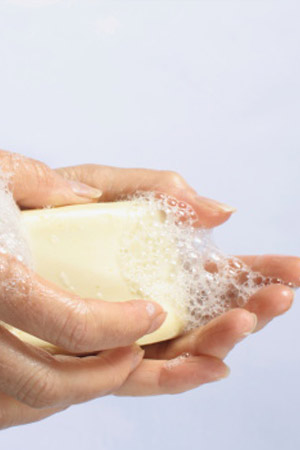 The hand washing antibacterial soap that you use could expose you to a widely used chemical which has the potential to develop problems related to the foetuses and newborns. This new study was published in the Journal of Occupational and Environmental Medicine.

A synthetic bacterial agent known as Triclosan is usually found in thousands of consumer products that include soaps, cosmetics, acne creams and also in certain brands of toothpaste. The US Food and Drug Administration have reviewed safety based on a lot of researchers that point to the action of the hormones. These can cause developmental problems in the foetuses of a woman, and also in newborns, besides other health concerns.

In the study researchers analysed urine samples from two groups of 38 doctors and nurses out of which three fourths of them were women at Hospital 1 and Hospital 2. In the first instance the doctors and nurses used antibacterial soap containing 0.3 percent triclosan, while in Hospital 2 they used plain soap and water. The workers in Hospital 1 were found to have higher levels of triclosan in their urine samples than the workers at Hospital 2. Also, the study participants were asked to use popular commercial toothpaste which contained triclosan.

Study co-investigator Paul Banc who is a professor of medicine at the University Of California, San Francisco said, "Antimicrobial soaps can carry unknown risks, and triclosan is of particular concern. Our study shows that people absorb this chemical at work and at home, depending on the products that they use. If non-triclosan-containing soaps are available, use the alternative. This is based on the precautionary principle - that is, if you don't know for certain that something is unsafe, it's better to err on the side of caution.”