After Dengue and Chikungunya, brace yourselves for Bird Flu

Few days back after India declared itself free of H5N1 aka Avian influenza, closure of Delhi zoo and Deer Park following the deaths of water birds hit the panic button. What is avian influenza and what makes it so deadly? Do we really have to quit eating chicken? Let’s know more about Avian influenza, H5N1. 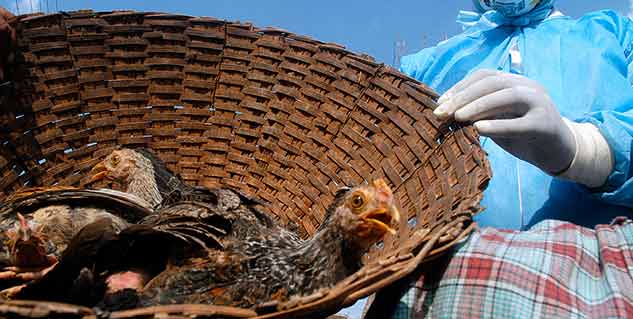 What is Avian Influenza?

Widely known as bird flu, Avian influenza is an infectious viral disease caused in birds, mostly the wild fowls like water ducks, geese and wild cocks.
H5n1 is highly infective virus and is fatal to mostly birds. Commonly wild ducks are the primary and natural bearers of the bird flu virus but it is also being suspected that it can transmit from wild fowls to domestic poultry.

Person to person transmission is not that simple only close contact between two people can spread the disease. Casual contacts such as shaking hands or hugging does not seem to be transmit the virus. However, if the disease somehow manages to spread from human to human, it could be fatal.

What are the symptoms of the disease?

The symptoms of H5N1 infection are quite identical to any other seasonal flu, making it difficult to diagnose it.  Some of the most common symptoms are as follows:

Know how you can prevent influenza in winters.

What are the symptoms of influenza?

However the symptoms can aggravate and can even lead to respiratory troubles. In some rare cases, the flu has infected the brain and digestive tract and has also killed the sufferers.

The primary prevention action should be controlling the disease in animals in order to decrease the risk in humans.