Understand Psoriasis, its Types and if you are at Risk

Psoriasis is a chronic skin disorder which causes red, flaky, crusty patches of skin covered with silvery scales. The disease is not infectious and is rarely life-threatening.

Psoriasis is a chronic skin disorder that causes scaling and inflammation. It affects 2 to 3 per cent of all people and may develop as a result of an abnormality in the body's immune system, which normally fights infections and allergic reactions. 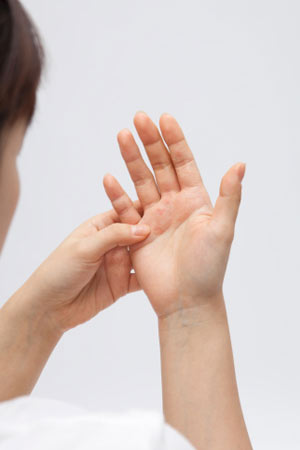 Psoriasis causes skin scaling and inflammation and sometimes, itching. It goes in a cycle i.e. it starts with the reddening of the skin followed by pustules and scaling. There are several types of psoriasis:

These are rounded or oval patches of affected skin. Plaque psoriasis is usually red and covered with a thick silvery scale. Plaques often occur on the elbows, knees, scalp or near the buttocks. They may also appear on the trunk, arms and legs.

It is a type of psoriasis that tends to affect skin creases, especially those in the underarm, groin, buttocks, and genital areas or under the breast. The red patches of inverse psoriasis may be moist rather than scaling.

In Pustular psoriasis, the skin patches are studded with pimples or pustules.

In this type of psoriasis, many dime-sized or smaller red, scaly patches develop suddenly and simultaneously, often in a young person who has recently had a strep throat or a viral upper respiratory infection.

About 50 per cent of people with skin symptoms of psoriasis also have abnormal fingernails; especially nail thickening or small indentations, called pitting. A type of arthritis, called psoriatic arthritis, can affect 10 to 20 percent of all people with psoriasis, and in some people, it occurs before skin changes appear.

Who is at Risk?

It has been recorded that 3 per cent of the people in the world get affected by psoriasis. Psoriasis can begin at any age, but most commonly develops between the age of 11 and 45. Psoriasis is not contagious and a lot of people have just one patch affected because of the disease.

Psoriasis appears to have developed because of an infection, medications, skin trauma or psychological factors like stress.
One cannot predict whether he/she will develop psoriasis or not. In fact, 50-60 per cent of people who develop the skin condition do not know of anyone else in their family who has had it.

Certain types of psoriasis may be localised to specific parts of the body like just the hands or feet and others may affect the entire body.